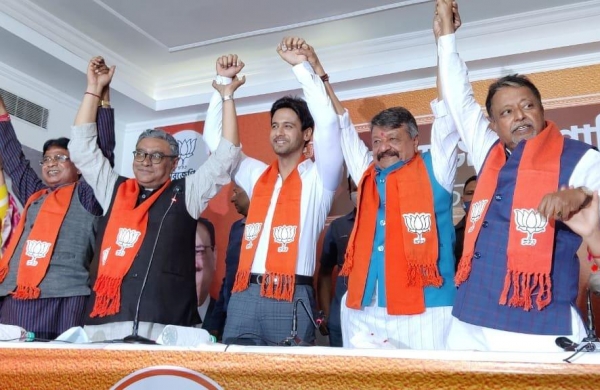 By Express News Service
NEW DELHI: As many as 79 BJP leaders from West Bengal, including the turncoats and the new joinees, have been accorded VIP security by the Centre ahead of the Assembly elections in the state.

Officials said the security cover will be provided by the CISF that has a dedicated wing for this task, called the special security group (SSG).

ALSO READ | ‘My one leg is enough to boot BJP out from Bengal’, says wheelchair-bound Mamata

The Home Ministry decides the level of protection an individual needs based on inputs from intelligence agencies which include the IB and R&AW.

Meanwhile, protests were held on Monday outside the BJP’s office here and elsewhere across Bengal over the second list of poll candidates released by the party a day ago, laying bare the rift between old-timers and new entrants.

A section of demonstrators even banged on the bonnet of Roy’s car and threatened to storm the office, as the police faced a difficult time controlling them.

“We demand immediate withdrawal of TMC turncoat Mohitlal Ghati’s candidature in Panchla. We cannot accept him as a nominee,” one of the agitators said as she lay flat on the road outside the party office.

In Hooghly district’s Singur assembly constituency, BJP activists locked up party functionaries in their office over the nomination of another TMC turncoat and sitting MLA Rabindranath Bhattacharya.

The octogenarian leader switched camp after being denied a ticket by the ruling party.

Around hundred BJP supporters in Raidighi assembly segment of South 24 Parganas held demonstrations all day in protest against the nomination of TMC defector Santanu Bapuli.

“He was involved in attacks mounted on us, he had tried to crush the BJP,” a party supporter said.

ALSO READ | ‘What about the agony of families of BJP workers killed in TMC rule’: Amit Shah to Mamata on her injury

Addressing a press conference at the BJP headquarters in New Delhi, party general secretary Arun Singh along with Union ministers from West Bengal, Babul Supriyo and Debasree Chaudhuri, released the names of 63 candidates for the third and fourth phase of polls, to be held on April 6 and 10.

Massive protests erupted in various parts of the state following the announcement, with several leaders openly expressing dissatisfaction over the candidature of newcomers.

In north Bengal, agitators took to the streets to oppose the nominations of former chief economic adviser to the government, Ashok Lahiri, from Alipurduar and Gorkha Janmukti Morcha turncoat Bishal Lama from Kalchini.

“We don’t know who is this Ashok Lahiri and why was he nominated. Old-timers from Alipurduar are being ignored. Bishal Lama joined the party just two days ago and he was nominated. Local BJP workers will never accept this,” a saffron party leader, who did not wish to be named, said.

Referring to the demonstrations, BJP spokesman Shamik Bhattacharya claimed “these are stray incidents.”

“The BJP is growing in size, as more and more people join the party. The number of aspirants has also increased. There are bound to be some problems, but that will be addressed soon,” he added.