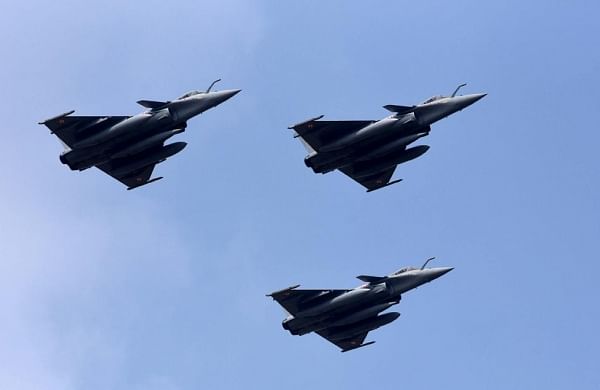 NEW DELHI: As a part of the Azadi Ka Amrit Mahotsav commemorating 75 years of India’s independence, the “grandest flypast ever” with 75 aircraft will take place over Rajpath in Delhi during Republic Day celebrations, said Air Force PRO Wing Commander Indranil Nandi on Monday.

These 75 aircraft will also include five Rafale.

“The grandest flypast ever to take place over Rajpath during the Republic Day parade with 75 aircraft including the planes from IAF, Army, and the Navy. This is in line with the Azadi ka Amrit Mahotsav celebrations,” the IAF public relations officer (PRO) said.

“Five Rafale to fly over the Rajpath in the Vinaash formation,” he added.

17 Jaguar fighter aircraft will fly in the shape of ’75’ to celebrate Azadi ka Amrit Mahotsav.

Navy’s MiG29K and P-8I surveillance aircraft will also fly in the Varuna formation, the PRO informed.

India will celebrate its 73rd Republic Day on January 26 this year, honouring the historic date when the country completed its transition towards becoming an independent republic after the Constitution came into effect. As part of the celebrations, an annual Republic Day parade is held in Delhi’s Rajpath.

Meanwhile, a contingent of five Central Asian nations – Kazakhstan, Kyrgyzstan, Tajikistan, Turkmenistan, and Uzbekistan, who will be chief guests for Republic Day 2022 celebrations, has arrived in Delhi to participate in the event. (ANI)