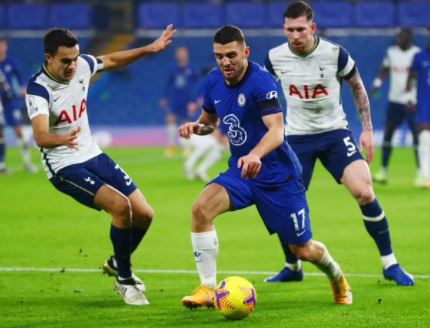 In an incredibly cagey game in the 2020-21 Premier League at Stamford Bridge, Chelsea and Tottenham Hotspur split points following a goalless draw.

The Blues went into the game in the knowledge that a win would take them to the top of the Premier League table, but instead, the stalemate took Tottenham Hotspur back to the summit on goal difference while Chelsea remain third.

Chances for both Chelsea and Tottenham Hotspur were few and far between throughout the match, as the game had the air of a high-stakes chess contest rather than a swashbuckling affair. To tell the truth, a draw was probably the fair result.

Against Spurs, Chelsea took 13 shots but only managed three on target while Tottenham Hotspur had five attempts with one on target. Essentially, this was a game of half-chances, and neither side really came too close to scoring; Mason Mount’s long-range effort did draw a fine save from Hugo Lloris, though.

It raises a pertinent question: which side is the happier with a point? On the surface, one will have to say Tottenham Hotspur, as Jose Mourinho’s side moved back to the top of the Premier League table after being on the defensive for large swathes in the game.