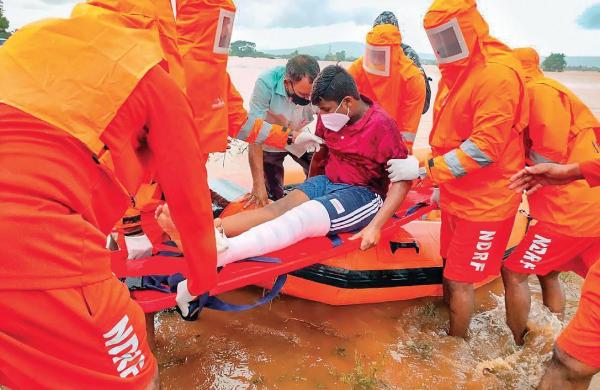 By Express News Service
MUMBAI/CHANDIGARH/BENGALURU:  On a day 30 more deaths were reported from the rain-affected districts of Maharashtra, the government on Sunday quantified the total loss, saying 228 people have died, while 100 are missing so far. A majority of the casualties and fatalities were recorded in the Konkan and western regions. Deputy Chief Minister Ajit Pawar said floodwater has not receded from areas and evacuation operations are still on.

Guardian minister of Kolhapur Satej Patil said that the situation was very grim. “We can provide food to the marooned people, but arranging fodder for the animals is a major challenge. On Sunday, Radhaanagari dam’s five gates were opened after it attained full capacity, submerging more areas.”

Meanwhile, nine persons died and three more were grievously injured in rain-triggered landslides in Himachal Pradesh’s Kinnaur district on Sunday. The deceased – part of 11-member tourist group – were passing through Batseri on Sangla-Chitkula road when massive boulders started raining down on their vehicle from the mountaintop. Another landslide led to a bridge collapse on Baspa river, triggering a shower of boulders, leaving several vehicles damaged. The series of landslides led to a tailback even as rescue teams rescue teams mounted operations.

Karnataka Chief Minister B S Yediyurappa visited Sankeshwar and other villages affected by flooding in Hiranyakeshi river over the past one week.  Heavy rains in Belagavi and neighbouring Maharashtra have resulted in huge inflow into Krishna, Vedaganga, Dudhaganga, Hiranyakeshi, Ghataprabha, Markandey rivers, leaving several villages inundated.