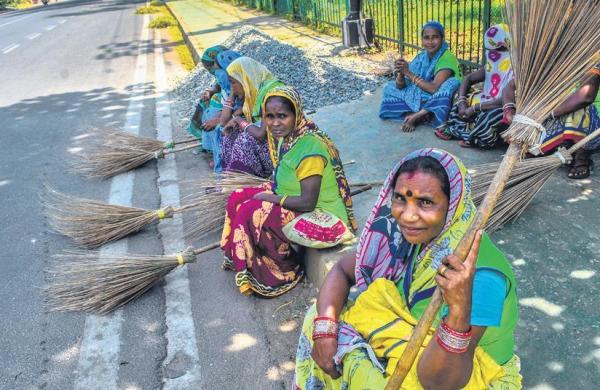 By PTI
NEW DELHI: he Delhi Commission for Safai Karamchari (DCSK) Wednesday informed the Delhi High Court that it has taken cognisance of the death of 25 sanitation workers who died in harness during the COVID-19 lockdown period and Chief Minister Arvind Kejriwal has announced suitable compensation for their dependents.

The commission said it has recommended compensation and compassionate appointment in the case of death of these persons and in some cases compensation of Rs one crore to Rs 10 lakh has been paid.

The submissions were made in an affidavit filed by DCSK before a bench of Chief Justice D N Patel and Justice Jyoti Singh which was hearing a PIL seeking payment of pending salaries of sanitation workers and providing them medical facilities as well as personal protective safety gear amid the pandemic.

Advocate Mehmood Pracha, representing petitioner Harnam Singh, sought time to file rejoinder to the commission’s affidavit after which the court listed the matter for further hearing on September 13.

The DCSK, in its affidavit, said “this commission has taken cognizance of the death of some safai karamcharis (sanitation workers) who died in harness during the COVID-19 lockdown period.

It further said that the plea concerns salary and safety equipments but the concerned authorities — three MCDs, NDMC, Delhi Cantonment Board — have not been impleaded as parties to the petition.

The commission said taking suo motu cognisance of non-payment of salaries to the sanitation workers, it has directed the MCDs to pay the dues in time as the workers are facing great financial hardship and are not in a position to meet their basic needs of health and education of their children and other family members.

The high court had earlier issued notices and sought replies of the Ministry of Social Justice and Empowerment, Delhi government as well as the National and Delhi Commissions for Safai Karamcharis on the petition.

The petition by Delhi resident Harnam Singh, who claims to be a social activist and a former chairman of the Delhi Commission for Safai Karamcharis, has alleged that sanitation workers were forced to work without the required protective gear during the time the pandemic numbers were increasing uncontrollably.

He has also alleged that even the two commissions set up for the welfare of the safai karamcharis did not perform their duties.

“Moreover, no facilities for treatment and care as well as medical insurance of these sanitation workers and their families have been made available by the respondents (Centre, Delhi government and the commissions),” the petition has claimed.

“As sanitation workers have been compelled to take drastic steps, it has serious implications for sanitation, cleanliness, and safety of the general public,” it said.