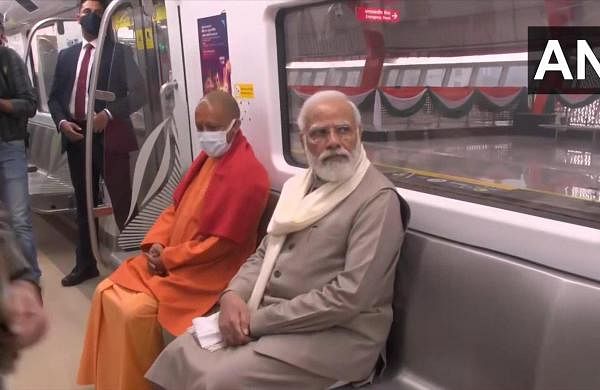 LUCKNOW: The seizure of a huge amounts of cash from the premises of Kanpur-based businessmen has become an issue in poll-bound Uttar Pradesh.

Setting the tone for the new narrative, Prime Minister Narendra Modi launched a scathing attack on the Samajwadi Party (SP) claiming that during their rule they had sprinkled the “Itar (perfume) of corruption” which was now surfacing for everyone to see and have a feel of it.

“The boxes full of cash were recovered a couple of days back. Everyone saw the mountains of currency notes, it is ‘their’ achievement. This is ‘their’ (SP) reality,” said the PM while addressing a mammoth gathering after inaugurating the first leg of 9-km of Kanpur Metro Rail Project worth Rs 11,000 crore.

He questioned the “guarded silence” of the SP leadership over the cash seizure from the premises of perfume and pan masala manufacturer linking him directly to the opposition party.

“Why are they silent now when the boxes full of cash are being seized, whether it was also their work and will they draw credit for it?” he asked adding: “They have locks on their mouth now and not coming forward to claim the credit for it the way they use to rush to grab the credit of every good work done by the present dispensation.”

Tuesday witnessed the BJP firepower in the political landscape of UP with Modi in Kanpur and Union Home Minister Amit Shah and BJP national chief JP Nadda leading party’s Jan Vishwas Yatras in Hardoi and Hapur respectively. The cash seizure issue ruled the BJP narrative at all the places in an apparent reference to the Samajwadi Party.

However, SP chief Akhilesh Yadav, who was leading his Vijay Rath Yatra in Unnao on Tuesday, tried to come clear of the controversy by denying any link with the tainted perfume trader. “Raids on Jain are not linked with Samajwadi Party at all. This incident shows that demonetization has failed. Officials who conducted raids may tell the source of the recovered newly-printed Rs 2,000 notes,” said Akhilesh.

In Kanpur, the PM continued to attack the previous regimes over corruption and accused them of turning a blind eye to UP’s development. “Earlier, parties used to rule UP with the mentality of plundering it. Lottery lagi hai loot lo… pehle ki sarkaron ne UP ko Khoob loota (they used to think that they had got the lottery to plunder the state for five years),” the PM claimed while referring to alleged scams worth crores in previous regimes.

Reiterating the slogan — farq saaf hai (the difference is clear) — coined by him a few days back in the state, the PM again stressed the might of the double-engine government saying that when the public money was used for the benefit of people, the projects were delivered in time as the double-engine government worked a day in and day out ensure the delivery in time, unlike the previous governments which had a myopic vision for UP’s development.

Raising the issue of law and order and praising the Yogi government’s efforts to wipe out the mafia and criminals from the state, the PM accused the previous governments of patronizing the goons and letting the law and order go haywire which, he claimed, had destroyed the industry in Kanpur, once known as the Manchester of the East.

“Now under Yogi government, with marked improvement on law and order scenario, the industrial culture is reviving in the state, investment is coming and mafia are opting for jail as their abode by way of cancellation of their bail,” he maintained.

“The parties which are engrained to patronize musclemen, oppose everything positive be it the law against teen talaq or making the marriage age of men and women alike,” averred the PM.Suiting the narrative in Kanpur city, PM Modi also talked about the welfare of the urban poor. He listed the achievements of the double engine government is riding the Ganga of pollution by stopping the Sisamau drain pouring the industrial discharge into the river. He also listed the housing schemes, free electricity connections, corruption-free bank transactions besides emphasizing the balanced approach of development with Sabka Saath, Sabka Vishwas.

Layoffs are deemed illegal if not carried as per Industrial Disputes Act: Labour Minister