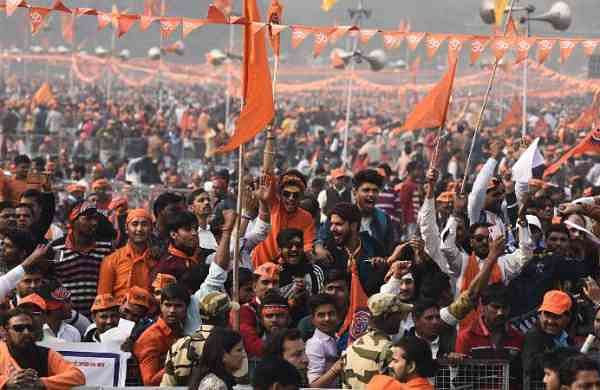 NEW DELHI: The Vishva Hindu Parishad (VHP) on Thursday condemned the incidents of attacks on temples in Bangladesh during Durga Puja and demanded strict action against the perpetrators as well as protection of Hindus in the neighbouring country.

In a statement, VHP general secretary Milind Parande urged the Bangladesh government to “duly compensate” the victims for their loss of life and property, ensure safety and security of the Hindu minorities, and put a curb on radical elements in the country.

“The Government of India, as well as the international community, should put pressure on the government of Bangladesh to take appropriate action to protect the lives and property of the minority Hindus and their spiritual religious and cultural thoughts, expressions, belief, faith,” Parande said.

The Bangladesh government should ensure strict measures to prevent the recurrence of such incidents in future with immediate arrest and exemplary punishment of radical elements, he demanded.

Hindu temples in Bangladesh have been vandalised by some unidentified miscreants during Durga Puja celebrations, prompting the government to deploy paramilitary force in 22 districts after three people were killed and many others injured in riots, according to media reports.

The bdnews24.com news website reported that after allegations of blasphemy, a local temple in Cumilla, about 100 kms from Bangladesh capital Dhaka, became the centre of a social media storm on Wednesday.

“There are reports that there is a continuation of brutal torture and persecution of the Hindu minorities.

The situation there is likely to deteriorate further as there are fears of further attacks on Hindus.

Due to this the minority community of Bangladesh is even more terrified,” Parande claimed.