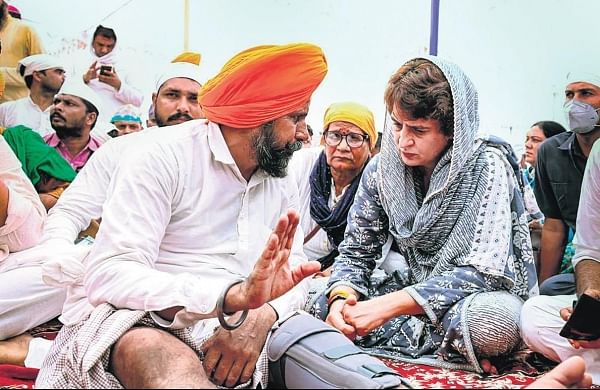 LUCKNOW: Congress general secretary Priyanka Gandhi Vadra and RLD chief Jayant Chaudhury were in a gathering of thousands of farmers from various states at Tikunia in Lakhimpur Kheri on Tuesday to attend the last rites of farmers killed during violence on October 3. However, they were denied space on the stage as the farmer leaders maintained that politicians were not allowed there. There were posters against Congress as well.

A stage was erected in a sprawling space of 30 acres, barely a kilometre away from the spot of violence. Priyanka and other Congress leaders reached around 1 pm. Samajwadi Party leaders, including district president Rampal Singh Yadav, Dr RA Usmani and others, were also there. RLD president Chaudhary arrived later.

No political leader was allowed space on the stage even if they expressed a desire to address the gathering. As per sources, Sanyukt Kisan Morcha refused to give stage space to the politicians. They had to sit among the crowd. Even posters targeting Congress leaders without naming them were seen. ‘Those behind 1984 Sikh massacre are not required to show fake sympathy. Don’t rub salts on wounds of Sikhs’ read one.On the stage, family members of deceased farmers Daljeet Singh and Gurvinder Singh of Bahraich district, Nachhatar Singh and Lavpreet Singh of Lakhimpur Kheri district, brother and daughter of journalist Raman Kashyap of Nighasan sat holding photographs of the deceased persons.

Priyanka and Jayant joined thousands of farmers from Punjab, Haryana, Uttarakhand and other parts of Uttar Pradesh to attend the last rites amid a thick security blanket in and around Lakhimpur Kheri. The ritual of Antim Ardas was organised by Sanyukta Kisan Morcha and Bharatiya Kisan Union leaders, including Rakesh Tikait, Darshan Singh Pal, Joginder Singh Ugrahan, Dharmendra Malik and local farm union leaders.

Ashish grilled by SITPrime accused in the violence case, Ajay Mishra’s son Ashish, was taken to the Crime Branch office by the Special Investigative Team for interrogation. Her was sent to three days of police custody on Monday. Ashish was arrested on Saturday night.

Akhilesh calls for BJP ouster in ’22Embarking upon Samajwadi Vijay Yatra from the banks of River Ganga in Kanpur on Tuesday, Samajwadi Party chief Akhilesh Yadav, slammed the ruling BJP referring to Lakhimpur Kheri incident saying that the way it had crushed farmers, it would crush the Constitution of India if voted back to power in Uttar Pradesh.  The programme aims to cover all 403 Assembly segments before poll notification arrives.

Cong memo to Prez on slain farmersA Congress delegation led by MP Rahul Gandhi will present a memorandum to President Ram Nath Kovind on the violence in Lakhimpur Kheri on Wednesday. The seven-member delegation will include leaders Priyanka Gandhi Vadra, Mallikarjun Kharge, A K Antony, Ghulam Nabi Azad, Adhir Ranjan Chowdhury and K C Venugopal. The party has written to Kovind last week seeking an appointment with him.

Alert in Assam over threats from ISI, al-Qaeda