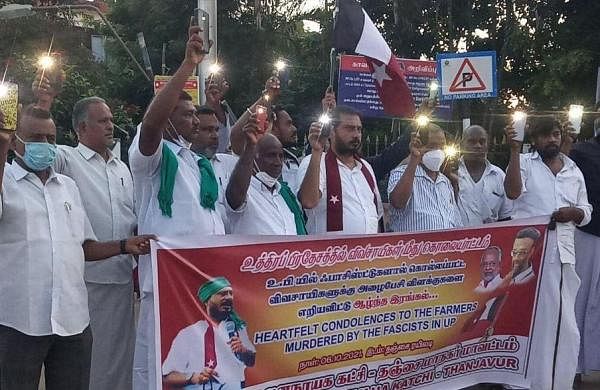 MUMBAI:  The three alliance partners in Maharashtra — Shiv Sena, NCP and Congress — have called a Maharashtra bandh on Monday in protest against the killing of farmers at Lakhimpur Kheri in Uttar Pradesh.

The Maha Vikas Aghadi leaders said they called the state-wide bandh to show that Maharashtra is with the farmers and will remain with them. The bandh came into force on Sunday midnight. Essential services providers such as hospitals, ambulances, medical stores and milk supply vehicles will remain functional.“Democracy has been killed in broad daylight in Uttar Pradesh. How can farmers protesting peacefully be killed by BJP leaders? This is arrogance of power and people will teach them a lesson in the upcoming elections,” said Sanjay Raut, senior Shiv Sena leader.

He said that all the alliance partners of Maha Vikas Aghadi and their workers will participate in the protest to express solidarity with the farmers. “The BJP government is an anti-farmer government. It is adamant and therefore does not take the anti-farmer laws back despite the historic agitations staged by the farmers. The entire world took note of farmer agitations but not the ruling party. In fact, rather than showing any sympathy, BJP leaders killed farmers. It’s like rubbing salt on the wound,” Raut said.

Nationalist Congress Party’s chief spokesperson Nawab Malik said they have appealed to people to participate in the statewide bandh by closing down their shops. “We all must come together in the larger interest of the farmers. Farmer is the backbone of the Indian economy. They have to survive. We must keep our work shut for one day for their sake. Workers of all the three parties will request shops, establishments and people to show support to the farmer. Shopkeepers on their own must keep shops shut for one day,” said the NCP leader.