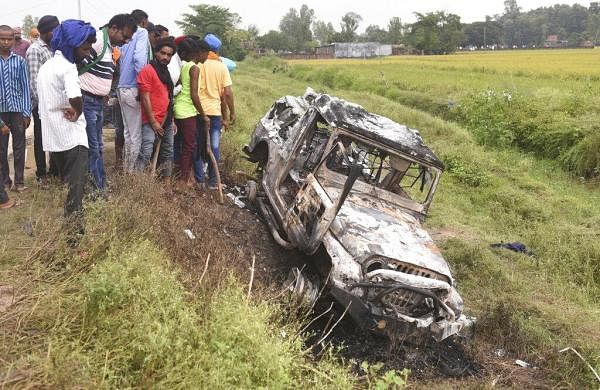 LAKHIMPUR KHERI: The second FIR lodged over the Lakhimpur Kheri violence claims “bad elements” among farm law protesters attacked BJP workers who were in an SUV but makes no reference to the mowing down of farmers or presence of Union minister Ajay Mishra’s son Ashish in the car.

The FIR was lodged on October 4 at the Tikonia police station over the alleged lynching of BJP workers while the other one mentions name of Ashish Mishra, who was allegedly in one of the cars that knocked down four farmers.

The second FIR mentions only one “unnamed rioter”, who has been charged with IPC Sections 302 (murder), 324 (causing hurt by dangerous weapons or means) among others.

It was lodged on the basis of a complaint by one Sumit Jaiswal, who claimed to have been among the BJP workers going to welcome Uttar Pradesh’s Deputy Chief Minister Keshav Prasad Maurya for a wrestling event where he was the chief guest.

The wrestling event was organised at Banwirpur, the native village of Union Minister of State for Home Affairs Ajay Mishra ‘Teni’, whose son Ashish, alias Monu, was arrested on Saturday in connection with the death of four farmers.

In total, eight people had died in the violence during the protest in the Tikonia area of the district on October 3.

The dead included two BJP workers, the SUV driver and a journalist.

According to Jaiswal, journalist Raman Kashyap, car driver Hari Om and BJP workers Shubham Mishra and Shyam Sunder were lynched by the protesters.

However, parents of the journalist have alleged that he was among those knocked down by a vehicle.

“The applicant along with the BJP workers was going to the Kale Sharan chowk and was in the Mahindra Thar (UP 31 AS 1000).

Driver Hari Om, who was driving the vehicle, and my friend namely Shubham Mishra, were going to welcome the chief guest,” the FIR, seen by PTI, stated.

“The bad elements in the farmers’ protest had attacked the vehicle by bamboo sticks, bricks and stones due to which driver Hari Om got injured and stopped the car on the road side,” Jaiswal alleged.

“After this, the said protesters who took Hari Om out of the car and started to thrash with bamboo sticks and sword.

We were pelted with stones and tried to run away from there and during this, the said persons caught my friend Shubham Mishra and started to beat him up,” Jaiswal alleged.

He claimed he somehow managed to run away from the spot, otherwise, he too would “have been killed”.

He claimed he later got to know through social media that Hari Om and Shubham Mishra have been killed while “two other unidentified” BJP workers have also died, according to the FIR.

According to a submission made in the Supreme Court by the UP government, it has formed a special investigation team (SIT) for an unbiased and transparent probe into the two FIRs.

So far, three accused in the first FIR, including the Union minister’s son Ashish Mishra, have been arrested, according to officials.