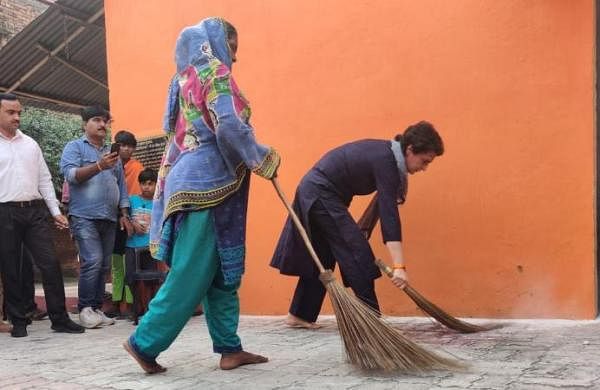 LUCKNOW: Congress leader Priyanka Gandhi Vadra on Friday made a surprise visit to a Dalit hamlet here and picked up a broom to clean it, reacting to Chief Minister Yogi Adityanath’s dig at her act of sweeping of floor at a Sitapur guest house during her detention.

In reply to a query over Gandhi’s act of mopping during her detention, Adityanath earlier during the day had said the people wanted to make them (the Congress leaders) worth doing that and that is what they have made them.

These people have no work except spreading nuisance and negativity, he had said.

The chief minister had made the remark earlier in the day during a programme at a private TV news channel.

In response to the chief minister’s remark, Gandhi descended upon the Dalit colony and picked up the broom, saying it is a symbol of simplicity and self-respect.

While mingling with the inhabitants at Luv Kush Nagar, the Congress general secretary cleaned the area, saying crores of women and sanitation workers in the country use brooms daily for cleaning, a Congress spokesman said.

At the TV news channel programme, the chief minister had further said, “These people have nothing but a negative attitude. They were not seen during the corona times. When people were suffering from the infection, it was the BJP workers and government which were with people amid a nil presence of these people,” he had added.

But now they have got up from their slumber and took up the Lakhimpur incident as an opportunity, Adityanath said.

“He has not humiliated me by saying so he has humiliated you all as crores of Dalit brothers and sisters are safai karamcharis and they do this work,” Priyanka told residents of Luv Kush Nagar, taking exception to the Chief Ministers comments.

“I have come here for doing the cleaning work along with you all and let Yogi Ji know that cleaning and using a broom is a self-respecting task,” she said.