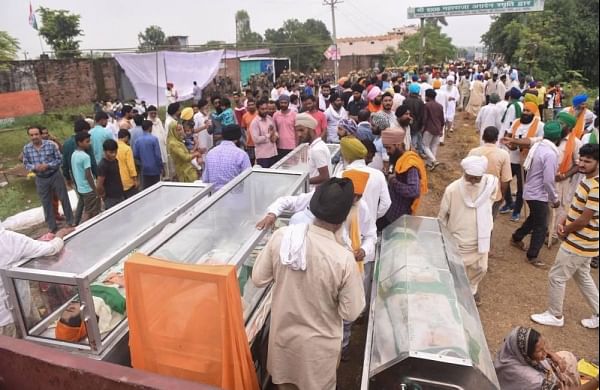 LAKHIMPUR KHERI: A sum of Rs 45 lakh each was given to the families of two BJP men and a driver of Union Minister of State for Home Ajay Kumar Mishra, killed in the violence here after a car in the BJP convoy allegedly ran over protesting farmers.

A total of eight people, including four farmers and a local journalist besides two BJP men and their driver were killed in the violence on Sunday.

The families of the killed farmers and the journalists too had been given the compensation of Rs 45 lakh earlier by the Uttar Pradesh government.

The compensation cheque to families of slain BJP man Shubham Mishra and minister’s driver Hariom Mishra was given by BJP’s Lakhimpur (Sadar) MLA Yogesh Verma, away from the media glare on Thursday, said sources.

The compensation cheque to the kin of the second slain BJP man Shyam Sundar was given by local tehsildar (revenue official), they added.

The state government had initially announced an ex gratia each of Rs 45 lakh for the families of four farmers but the kin of local journalist Raman Kashyap too was given the cheque later.

Nighasan tehsil SDM O P Gupta accompanied by other civil and police officials had handed over the money to the family of the journalist two days ago.

Relatives of the two killed BJP workers and Mishra’s driver confirmed receiving the money with the photographs of the MLA handing over the cheques to two families also doing the rounds on social media.

The MLA could not be reached for the confirmation but a government official said on Friday that the compensation money has been given to families of all eight persons by the government.

Following the preliminary probe into the Sunday violence, the two killed BJP men and Mishra’s driver too have been included among the originally unnamed six accused in the FIR as responsible for triggering the violence.

The sole accused named in a complaint filed by a Bahraich farmer is the Union MoS (Home) Mishra’s son Ashish Mishra.

Among the four deceased farmers, while Lovepreet Singh and Nachatar Singh were from Lakhimpur, Daljeet Singh and Gurvinder Singh hailed from Bahraich.