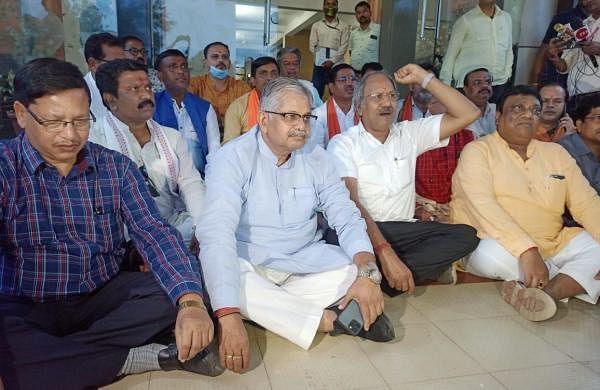 KAWARDHA: BJP MP Santosh Pandey and former parliamentarian Abhishek Singh were among some party leaders who have been charged with rioting and other offences in an FIR filed in connection with violence in Chhattisgarh’s Kawardha town three days ago, officials said on Friday.

Pandey is the Lok Sabha MP from Rajnandgaon, while Abhishek Singh, the son of former chief minister Raman Singh, had represented the same seat earlier.

Kawardha, around 120km from state capital Raipur, is part of the Rajnandgaon Lok Sabha constituency.

Pandey, ex-MP Singh, state BJP secretary Vijay Sharma and some other party leaders had allegedly attended a rally taken out by right- wing outfits in Kawardha, the headquarters of Kabirdham district, on Tuesday that had turned violent, causing damage to properties.

The local authorities had imposed a curfew in Kawardha to bring the situation under control.

According to officials, the curfew will be relaxed from 10 am to 2 pm from Saturday.

The FIR has been lodged against at least 1,000 people, including some BJP leaders, in connection with the violence, Kabirdham Superintendent of Police Mohit Garg said in a press conference here.

The violence occurred two days after a clash broke between people belonging to two communities over removal of religious flags from a thoroughfare in Kabirdham.

So far, 93 people, 24 of them hailing from outside Kabirdham district, have been arrested in connection with both the incidents – the October 5 violence and the October 3 clash, he said.

Based on preliminary investigation, MP Pandey, Abshishek Singh and Vijay Sharma have been named in the FIR and charged with rioting, abetting riot and other offences, Garg said.

Further investigation was underway and CCTV and video footage of the violence was being scanned based on which more arrests will be made, the SP added.

The two officers said the situation was peaceful in the town now and relaxation in the curfew will be given between 10 am and 2 pm from Saturday onwards.

They, however, said the Internet services will continue to remain suspended in the town.

Trouble started on October 3 after people from two communities clashed over removal of religious flags from Lohara Chowk in Kawardha.

To protest the incident, right-wing outfits took out a rally on Tuesday which turned violent.

Meanwhile, a delegation of the opposition BJP on Friday met Governor Anusuiya Uikey in Raipur and sought a judicial probe into the Kawardha clash.

In a memorandum submitted to the Governor, the BJP said Kawardha had been a centre of political and social harmony, but for the last 2 to 3 years attempts were being made to disturb its amity for a particular section of the society.

Following the unpleasant incident that happened recently, the administration, instead of finding an amicable solution, allegedly favoured a particular section that kept roaming in the town wielding weapons.

No action was taken against them, the party said.

They requested the Governor to get the matter probed by a judicial panel, claiming the district and police administration have lost their credibility.

The opposition party sought release of those lodged in jails following the incident and demanded stern action against those responsible for the violence.

Former CM Raman Singh, Pandey and Abhishek Singh were part of the delegation that called on the Governor.