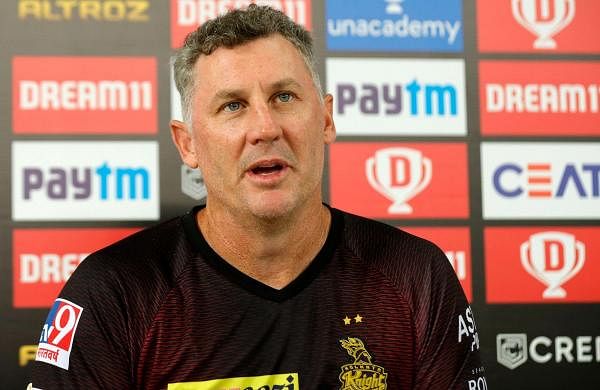 KKR have virtually assured themselves of a play-offs berth in the IPL after their 86-run win over Rajasthan Royals on Thursday. They are set to play against the third-place team of the league phase in the Qualifier 1 on Sunday.

“He (Russell) had a fitness test on Wednesday, and I think he’s just maybe a game away. So, I think he’d be pushing hard over the next few days to get back in for the final (play-offs). (His availability) will be a huge boost not only for us but the competition. He’s world-class and he provides lots of entertainment,” Hussey said at the post-match press conference on Thursday.

With three play-offs spots already sealed by Delhi Capitals, Chennai Super Kings and Royals Challengers Bangalore, KKR consolidated their position for the fourth and final spot, finishing league engagements with 14 points from 14 games with an impressive net run rate of 0.587.

He admitted that there has been a change in fortunes for the KKR in the UAE after struggling in the Indian leg.

“At the halfway mark, we weren’t playing the type of cricket that we wanted to play. We are all about playing entertaining cricket — hitting fours, sixes — and with the ball, hitting the stumps, taking wickets, and fielding exceptionally well,” he said.

“So, the break probably did us a world of good — we got to refresh, recharge our batteries and re-plan — and come to Abu Dhabi. Abhishek Nayar did a great training session, all the boys got a lot of volume and (were) ready to go,” explained Hussey on how the change occurred in the group.

He credited head coach Brendon McCullum for the way KKR were playing. “He (Brendon) is so cool and calm that he’s got this plan and vision for the team to go forward. He believes in every player to play their best. He makes everybody feel that they are the most important person in the team. Brendon should take a lot of credit for the way everybody’s playing here tonight. Great for him, because he’s been through a lot,” Hussey said.

The 44-year-old former Australia cricketer also lavished praise on his players for putting up a team performance. “It is never easy playing on these types of surfaces. Shubman Gill, Venkatesh Iyer, Nitish Rana (and) Rahul Tripathi showed their class once again, they sort of adapted their games accordingly, and they knew if they take it deep in the batting innings, they are going to make a decent target,” he said.

“With the ball, pretty simple plans, bowled directly as fast as they can and at the stumps and we have got some world class spinners as well, and we back up each other in the field, so it was pretty much a team performance tonight,” Hussey said.

He said that KKR will watch the final league game between Mumbai Indians and Sunrisers Hyderabad on Friday “as a group” but they were looking forward to their play-offs game (Qualifier 1) against Royal Challengers Bangalore (likely to be third-place finishers).

Rajasthan Royals skipper Sanju Samson lamented that none of his batters could build a partnership with Rahul Tewatia, who was going strong from one end.

“Sharjah is his (Rahul Tewatia) favourite ground, he enjoys batting here. We could have a recent (decent) partnership with him. We could have had a close match, he was batting really well, he wanted someone else actually to be with him and have a good partnership. We didn’t do that and that’s why we ended up on the losing side,” Samson said.