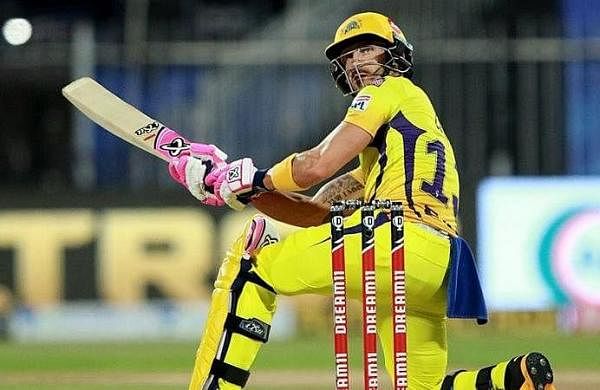 The CSK score was largely due to the fighting half-century by veteran South African player du Plessis and the 26 runs in the last two overs.

For Punjab, leggie Ravi Bishnoi impressed in a spell of 4-0-25-1 which included the scalp of CSK captain M S Dhoni while Arshdeep Singh (2/35) and Chris Jordan (2/20) did a good job for Punjab.

Du Plessis waged a lone battle, ensuring that the Punjab bowlers did not run away with the game with a hard-working half-century.

The 18th over saw him hit two boundaries off Jordan’s third over as CSK continued the attempt to cobble up a respectable score.

The South African hit two more sixes, one off Arshdeep and one off Mohammad Shami in the final over to give a much-needed push to the CSK innings towards the end.

That only 30 runs came in the powerplay indicated the CSK batters’ difficulty in getting Shami & Co away.

Coupled with the regular loss of wickets, the three-time champions crawled to 50 in the 10th over.

Shami, in particular, was hard to get away.

His first spell of three was brilliant, as he conceded only six runs.

Left-arm pacer Arshdeep continued to impress and got the wickets of the in-form Ruturaj Gaikwad (12, 14 balls, 1 four) and Moeen Ali (0).

Gaikwad hit one four before he top-edged an attempted pull of Arshdeep to give Shahrukh Khan on the leg-side an easy catch.

Moeen, who was in good nick in the first phase in India, failed to trouble the scorers, edging one to Rahul to give Arshdeep his second scalp.

Robin Uthappa, who replaced Suresh Raina in the playing XI, failed to make an impression, falling for just 2.

Dhoni, who has been struggling for form, made 12 before a drive away from his body off Bishnoi’s googly took the inside edge and rolled on to the stumps to compound CSK’s problems.