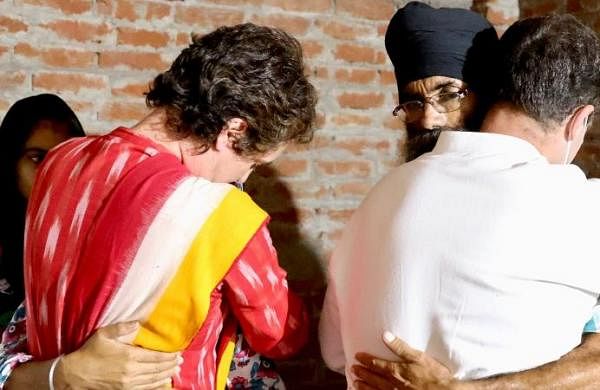 LUCKNOW: The politics intensified further over Lakhimpur Kheri violence, on Wednesday, as the 8-member Congress delegation, led by Rahul Gandhi and Priyanka Gandhi Vadra, met the families of deceased farmers in the trouble torn district. Earlier, the state government allowed the Congress delegation and other political parties to send their five member teams to Lakhimpur Kheri .

Rahul Gandhi accompanied by his aides reached Lucknow in the afternoon. He staged a protest at the Lucknow airport after reaching the state capital for a brief period against the district administration which was asking him to take government vehicle to Lakhimpur Kheri but Rahul Gandhi was adamant at taking his own vehicle.

Earlier, before leaving for Lucknow, Rahul Gandhi interacted with media persons and alleged the BJP government was carrying out ‘systematic attacks’ on the farmers in the country. “Almost all institutions have got in the command of the BJP and the RSS. Those, who speak against injustice, are jailed and those, who commit crimes go free”, alleged Rahul Gandhi.

He launched a broad side on Prime Minister Narendra Modi saying that despite being in Lucknow on Tuesday, the PM could not go to Lakhimpur, which is in shock after the ruthless killing of farmers and others on Sunday.

“Criminals can do whatever they want in Uttar Pradesh. Those, who kill are out of jail, while those who die or suffered with injustice or crimes are in jail,” said Rahul.

Later in the day, two Congress leaders Sachin pilot and Pramod Krishnan were taken into custody when they proceeded separately to Lakhimpur  Kheri. Meanwhile, Aam Admi Party  (AAP) RS MP Sanjay Singh went to Lakhimpur and met the families of the deceased farmers. He made the victim families talk to Delhi CM and AAP chief Arvind Kejriwal who assured the grieving families all help.