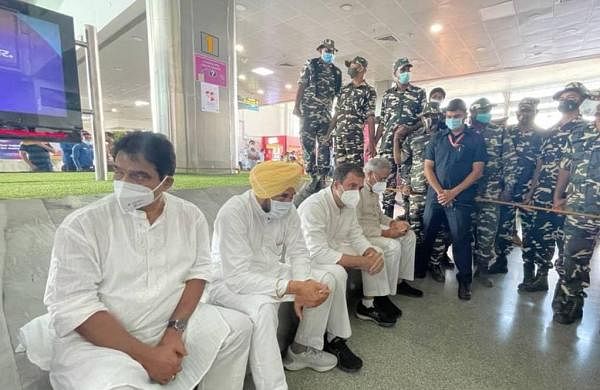 LUCKNOW: Former Congress president Rahul Gandhi has reached the PAC guest house at Sitapur where Priyanka Gandhi Vadra has been kept in detention on his way to Lakhimpur Kheri, which witnessed eight deaths in violence during a farmers’ protest on Sunday.

Gandhi left for Lakhimpur Kheri from the Lucknow airport in his own vehicle after staging a brief dharna on initially being asked to travel in a police car.

He had reached the airport this afternoon from Delhi along with Punjab Chief Minister Charanjit Singh Channi, his Chhattisgarh counterpart Bhupesh Baghel and Congress general secretaries K C Venugopal and Randeep Surjewala.

Venugopal and Surjewala are also accompanying Gandhi on his visit to Lakhimpur Kheri.

Television footage from the airport showed officials telling Gandhi to take the police vehicle, which he did not agree to and sat on a dharna there.

“We want to go in our own vehicles, but they want that we should go in their vehicle. I want to know why are you not allowing me to go? First, I was told that I can go in my own vehicle, now you are saying that you will go in a police vehicle. They are doing some mischief,” Gandhi told reporters.

Responding to a question, he said, “You can put me or Priyanka in a jail. It does not have any meaning. The question is that six people were crushed by criminals. Those who should have been in a jail, are not being put in a jail. We are being stopped from meeting the aggrieved families of the farmers.”

It took Gandhi a couple of hours to reach the Provincial Armed Constabulary guest house in Sitapur, around 88 km from Lucknow, where Priyanka Gandhi is in detention since Monday morning.

She was on her way to meet the families of farmers killed in Sunday’s violence in Lakhimpur Kheri when she was stopped.

Earlier in the day, the state government had denied permission to Rahul Gandhi for the visit, with an official spokesperson saying no one would be allowed to visit the violence-hit district to vitiate its atmosphere.

However, it later allowed Rahul, Priyanka Gandhi and three others to visit Lakhimpur.