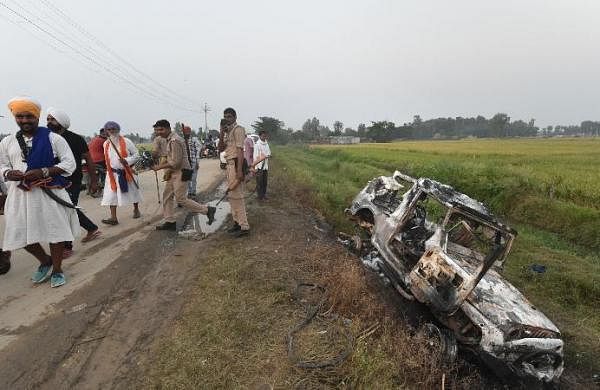 LAKHIMPUR KHERI: A 28-year-old journalist was among the eight people killed in the violence that erupted during a farmers’ protest at Lakhimpur Kheri.

Local journalists have demanded a compensation of Rs 50 lakh for the family of Raman Kashyap, who worked with a private TV channel.

They have also demanded a job for his wife and immediate arrest of the accused in the case.

Kashyap was a resident of Nighasan tehsil of the district.

Banbirpur, which is the village of Union Minister of State for Home Ajay Kumar Mishra, falls under this tehsil.

Kashyap’s family said he is survived by his wife and two children, a son and a daughter.

Congress general secretary Priyanka Gandhi Vadra, who is under detention in Sitapur, talked to Ram Dukare, the father of the deceased, over a local Congress leader’s phone.

AICC member Satish Aneja and a few other Congressmen visited the scribe’s home and connected Ram Dulare with Priyanka Gandhi over his mobile phone.

Aneja said she expressed grief over Kashyap’s death and promised all help to the family.

The Congress general secretary has been under detention at a PAC battalion campus in Sitapur since the early hours of Monday when she was heading to Lakhimpur Kheri to meet the families of farmers who died in Sunday’s violence.

The local journalists had held a dharna in Nighasan on Monday over Kashyap’s death in which his father was also present.

Ram Dulare said that his son was covering the farmers’ protest on Sunday when he was hit by a vehicle and got grievously injured.

The journalist could not be traced for a while after the incident and was admitted to the district hospital late on Sunday night.

He succumbed to his injuries on Monday and his body was identified by his father later.

Four others, including Kashyap, were also killed in the clashes.

Two were BJP workers, Shyam Sundar and Shubham Mishra (27), and one was the Union minister’s driver Hariom Mishra (35).

The government had announced of a compensation of Rs 45 lakh each to the families of the farmers at the venue of the agriculturists’ agitation in the presence of farmer leader Rakesh Tikait.