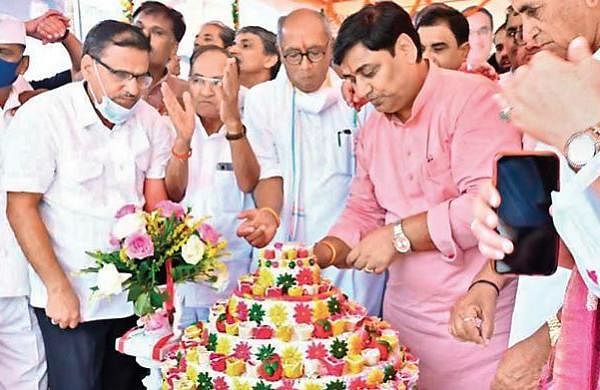 Birthday bash or show of strength?Congress state president Govind Singh Dotasara also used his birthday to showcase his strength and popularity. Dasara had become the PCC chief after Pilot was sacked 14 months ago but there was no major event in which he could demonstrate his power. But for his birthday bash on October 1, a grand stage was built outside the Congress headquarters where many big leaders were invited. Congress veteran Digvijaya Singh joined the celebration as Dotasara cut the cake in the presence of thousands of party workers.

Film City to be set up in Pali districtA film city may soon be set up at Sumerpur area in Rajasthan’s Pali district. For this purpose, the government has decided to give land to Mumbai’s Shilpali Film City Pvt. Ltd. The Cabinet Empowered Committee headed by Urban Development Department Minister Shanti Dhariwal approved the proposal for the construction of the film city in Sumerpur. The company had sent a proposal in 2018 through the Bureau of Investment Promotion (BIP). The city will be built on 375 bighas of land. Shilpali Film City Pvt. Ltd. will be allotted this land at a commercial rate and an additional 15 per cent of the amount which will be given to the local body will be taken separately. Besides film production, this project aims to boost tourism and employment in the area.

Mission Niryatak Bano wins praise  The Rajasthan government’s recently launched ‘‘Mission Niryatak Bano’ to boost exports has won praise from the Centre. At the concluding session of the Vanijya Utsav in Delhi, Union minister Piyush Goyal said that the Mission was a great idea that could inspire other states. “This is a helpful scheme for exporters and the team in Rajasthan deserves to be praised for this,” he said. Brainchild of PR Sharma, joint director of the Rajasthan Export Promotion Council, the scheme was launched in July this year. It aims to promote aspiring exporters by registering and handholding local traders who are willing to expand their business to foreign countries. Besides easing up the processes of government clearances, the state government offers incentives under the new policy which has already helped to create 1,700 new exporters.

PM’s cryptic message The virtual ceremony to lay the foundation stone of four medical colleges in Rajasthan last week has created quite a buzz. Ashok Gehlot put forward a list of development works to  PM Narendra Modi , who lauded the Rajasthan chief minister. Calling Gehlot a “good friend”,  “Rajasthan CM, while speaking, put forward a list of works. I thank him for the trust he has reposed in me. We follow different political ideologies, yet he spoke about it open-heartedly because he trusts me. This friendship, and the trust and faith, are the biggest strength of a democracy,” the prime minister added. Modi’s statement is now currently being much-discussed among political circles in Rajasthan.