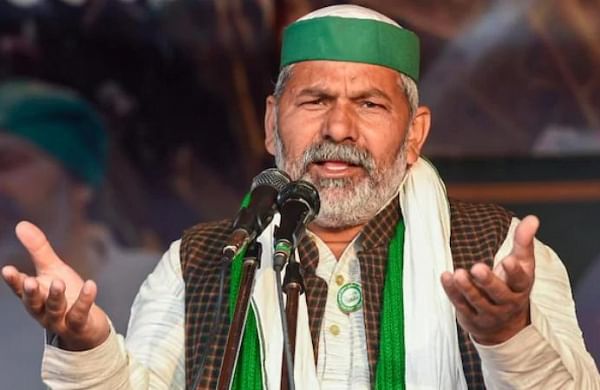 Other political parties in Punjab too demanded the registration of a case against those who “crushed farmers to death”.

Deputy Chief Minister Sukhjinder Singh Randhawa said he will visit Lakhimpur Kheri on Monday, along with a team of officials to have on a spot assessment of the situation there.

Expressing deep anguish at the tragic incident, Channi said the “ghastly and inhuman act” must be condemned by all in the strongest possible words, according to a statement.

Channi urged his counterpart in Uttar Pradesh, Yogi Adityanath, to bring the culprits to book so as to ensure justice to the victims’ families.

Four of the dead were traveling in the vehicles and the remaining four were farmers.

The farmers had assembled there to oppose Maurya’s visit to Banbirpur, the native village of Union Minister of State for Home and MP Ajay Kumar Mishra.

The violence broke out after two SUVs allegedly ran over a group of anti-farm law protesters.

Farmers alleged that the Union minister’s son was in one of the vehicles, a charge denied by Mishra.

“Thorough probe needed into the Lakhimpur Kheri incident. Justice must be ensured for the victims of the violence. Violence or provocation of violence is no solution to any problem.’: @capt_amarinder,” tweeted Amarinder’s media adviser.

Meanwhile, Aam Aadmi Party MLA and Leader of Opposition in the Punjab Assembly, Harpal Singh, Cheema condemned the incident and said the culprits should be immediately put behind bars.

He demanded that the farm laws should be repealed immediately.

“It seems the government is trying to protect the son of a Union minister of state, which is shocking and condemnable,” said Badal in a statement.

The Union Home Ministry should direct the Uttar Pradesh government to provide justice to the families of dead farmers immediately, he said.

“No one is above the law, FIR under sec 302 IPC must be registered against Union Minister’s son for murder of innocent farmers, he should be immediately arrested and put behind the bars for this barbaric act !!,” tweeted Sidhu.

Congress MP Partap Singh Bajwa also demanded the registration of a case against the son of the Union minister.

“All perpetrators including the MoS Home’s son should be booked for murder, for crushing the protesting farmers. Anything less than that would be a gross miscarriage of justice,” said Bajwa in a tweet.

Bharatiya Kisan Union leader Rakesh Tikait left for Lakhimpur Kheri on Sunday along with his several supporters following reports of violence there during a farmers’ protest in which eight people were killed.

While Tikait will be reaching Lakhimpur Kheri by Sunday midnight, Rashtriya Lok Dal chief Jayant Chaudhary too will visit the place on Monday.

“Farmers’ blood has been shed! I will reach Lakhimpur Kheri tomorrow,” Chaudhary tweeted in Hindi.

While leaving Ghazipur on the Delhi-Ghaziabad border for Lakhimpur Kheri, Tikait, the BKU’s national spokesperson, saiud claimed “several” farmers are feared dead during the violence in which two vehicles were also allegedly set on fire.

Two SUVs were set on fire by angry farmers, reports said, after they hit a group of protesters.

Four of the dead were travelling in the vehicles, a UP government official said in Lucknow.

The farmers had assembled there to oppose Uttar Pradesh Deputy Chief Minister Keshav Prasad Maurya’s visit to Banbirpur, the native village of Union Minister of State for Home and MP Ajay Kumar Mishra.

In a video message, Tikait claimed the farmers turned violent when they were attacked while returning after protests.

“The farmers in Lakhimpur were returning after the protest when they were attacked. Some of them were run over, while the fire was also opened on them. According to the information we have so far, several people have died in the incident,” Tikait said in a video message that he posted on Twitter.

In a separate statement, he said the incident has “once again exposed the cruel and undemocratic face of the government”.

“The people sitting in the government have revealed today to what extent they can stoop to suppress the farmers’ movement. But the government is forgetting that we did not bow down even to the Mughals and Firangis (referring to the British) for our rights. The government should not test the farmers’ patience any further. The farmer may die but is not going to get scared,” he said.

He urged the UP government to register a murder case against the “killers of farmers” and ensure their arrest.

He also appealed to the farmers to maintain peace, saying the victory will be theirs.

“If the government does not come to its senses, not a single BJP leader will be allowed to leave his or her house,”{ the farmer leader threatened.

The violence broke out after two SUVs allegedly ran over a group of anti-farm law protesters who were demonstrating against the visit of Uttar Pradesh Deputy Chief Minister Keshav Prasad Maurya at Tikonia-Banbirpur road in Lakhimpur Kheri district, some 130 km off state capital Lucknow.