‘Not as important as those trampled to death’: Priyanka Gandhi on altercation with UP Police 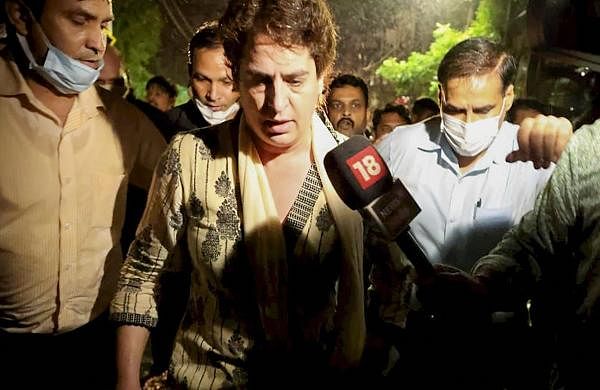 NEW DELHI: Congress leader Priyanka Gandhi Vadra was detained by Uttar Pradesh cops in the early hours of Monday when she was on her way to meet the families of those killed in the violence at Lakhimpur Kheri district on October 3, 2021.

Visuals of the Congress leader having an altercation with the deployed cops have gone viral since then. She can be seen asking for an arrest warrant from the police personnel.

“I am not important than those who were trampled to death. There may not be any law in your state but there are laws in the rest of the country. Show me the warrant or tell me on what basis are you stopping me. If you will make me sit in your vehicle, I will file a case of kidnapping,” she can be heard telling angrily in the videos shared by UP Congress on social media. “You are forcibly taking me. You don’t have the right. If you make me sit in the vehicle, you will be kidnapping me. Arrest me. Your forced ways amount to kidnap, molestation, and I will slap charges under these. I understand everything. Dare if you can to touch me. Go and bring a warrant from your officers and ministers and learn how to speak to women.”

The Congress leader also alleged that she was manhandled by the cops and made to sit in the vehicle. The police have taken her to the Sitapur police line.

Meanwhile, her brother Rahul also extended his support via social media. “Priyanka, I know you won’t hold back. They are stunned by your courage. In this non-violent fight for justice, we will make sure the ‘annadaataas’ of the country are victorious.,” he wrote.

The Wayanad MP had also slammed those who were silent on the violence at Lakhimpur Kheri. “The one who turns silent after seeing such an inhuman massacre is already dead. We will not let these sacrifices go in vain; ‘Kisaan satyagraha zindabad,” he wrote.