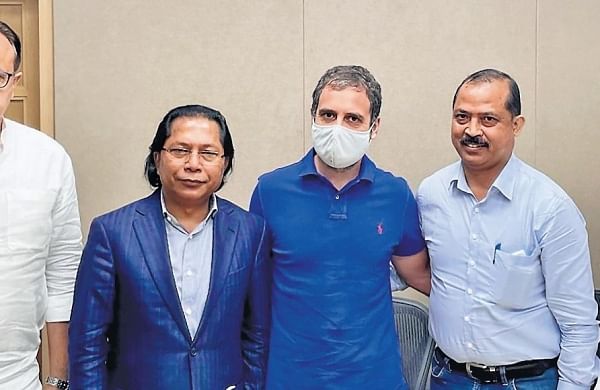 GUWAHATI: The All India Congress Committee (AICC) appears to have learned its lesson from Punjab and managed to avoid a similar crisis in Meghalaya — at least for now.

Sonia Gandhi and Rahul Gandhi, who met party’s Meghalaya leaders Mukul Sangma and Vincent H Pala in New Delhi in the last two days, are understood to have successfully doused the flames of infighting in the state unit.

The Congress in Meghalaya was virtually divided into two factions after Pala, who is the Shillong MP, was appointed the state chief by the AICC.

“We met her (Sonia Gandhi) today (Monday). The meeting went well. We also had a fruitful meeting with Rahul Gandhi yesterday. There was a misconception which has been cleared,” Pala said.

He said Sangma’s problem was not with him but with the AICC. Sangma was upset that the AICC had appointed Pala as the party’s Meghalaya president without consulting him.

There is a perception that Sangma is feeling threatened as Pala, by virtue of being the state president, could be a strong contender for the CM post if the Congress returns to power in 2023.

However, Pala asserted that he was  a “small man”. At the same time, he said he was not new to president post.

“I had worked as working president for three and half years. I have been an MP for 12 years. But I am very junior. I am a small man in the party,” Pala said.

He said he and Sangma would work together as the party fights the bye-elections to three seats, as desired by the party high command.