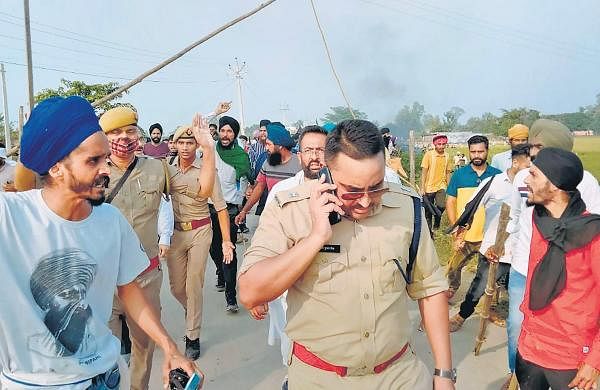 LUCKNOW: In the latest development in connection with the Lakhimpur violence which claimed 9 lives including four farmers on Sunday, the preliminary post-mortem report of the deceased farmers shows that none of them had received bullet injury.

According to sources, the autopsy report claimed that all four died due to excessive blood loss resulted from haemorrhage and trauma.

Notably, the protesting farmers had been claiming that at least one of the four deceased farmers had received the bullet fired by Ashish Mishra, son of Ajay Mishra, union minister of state for home during the Sunday violence.

However, as per the medical experts, haemorrhage and subsequent blood loss could be due to several reasons with ‘impact injury’ by some heavy object being one of them. Thus the possibility of the deceased having got trampled under some vehicle could not be ruled out.

According to Dr Sangeeta Bhatia, a general practitioner, haemorrhage leads to internal bleeding which could result in the death if the magnitude of the bleeding is excessive. “However, anything conclusively could not only be said in this case as the report is preliminary nature of haemorrhage is not known. Anything could be inferred only after the detailed report,” she added.

Earlier, the protesting farmers agreed to get the autopsy conducted on the bodies of the deceased farmers after they reached an understanding with the state government. The sources claimed that a panel of five doctors under videography conducted the post mortem examination.

Meanwhile, the identity of four BJP workers, including the driver of Union minister Ajay Mishra, who were allegedly beaten to death by the angry farmers, has also been established.

The driver was Hari Om Mishra whose vehicle, as per the Minister’s aides, was pelted with stones in Lakhimpur Kheri on Sunday. These aides claim that Hari Om lost control over the wheels after being allegedly hit by a stone in his head, overturning the vehicle that crushed at least two farmers. Mishra is also said to be associated with the BJP Yuva Morcha.

The vehicle also had BJP’s zonal chief Shyam Sundar and booth president Shubham Mishra, who were allegedly beaten with sticks and stones by agitating farmers. Later, their vehicle was set on fire. Later, the body of Ashish Pandey of Yuva Vahini was also recovered.

A local reporter of Sadhna channel, Raman Kashyap, was also reportedly attacked, and succumbed to the injuries on Monday. He was missing since Sunday evening and his body was identified by his family early on Monday morning. There is however no official version of events yet on who attacked the journalist.Functionaries close to minister Teni said three others were grievously injured in the clash and “are undergoing treatment at the local district hospital.”

The three injured have been identified by the locals as Lav Kush, resident of Banbirpur, Teni’s ancestral village, Ashish from Tara Nagar and Shekhar from Lucknow.

Meanehile, Lakhimpur district administration confirmed the names of four farmers who died in the incident — Gurvinder Singh, 20, from village Makronia in Nanpara, 35-year-old Daljit Singh of Banjara in Nanpara, Nakshatra Singh, 65, from Nayapurva village in Dhaurhara, and 20-year-old Lavprit Singh of Chaukra farm in Palia Kalan.