Power from cow-dung for Rural Industrial Parks in Chhattisgarh 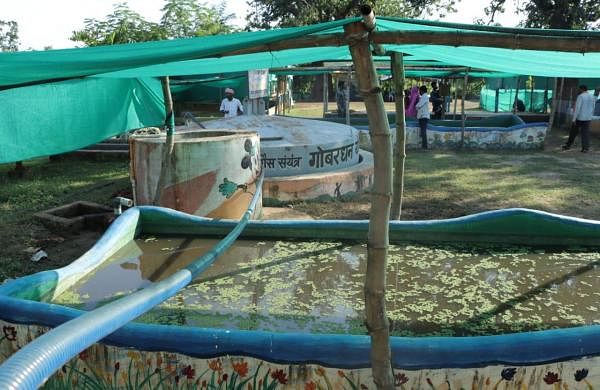 RAIPUR: Chhattisgarh villages and Rural Industrial Parks will now be illuminated by the electricity generated locally from cattle-dung.

The ambitious project will soon be spread across the state through Gauthans (cattle shed premises) which will be the unit to produce power from cow-dung.

Chief minister Bhupesh Baghel inaugurated three such power generation units installed at Rakhi in Bemetara district, Sikola in Durg and Bancharoda in Raipur district. Each of these units is producing around 150 kilo watt (KW) of power.

Since July last year, the Chhattisgarh government has begun procuring cow-dung under ‘Gaudhan Nyay Yojana’ at Rs 2 per kg, through the Gauthan Samiti (local committee that manages the cattle-shed with many cows) and the nominated self-help groups (SHGs).

To boost the rural economy, create scope of employment and income generating activities, the Gauthans have been developed as Rural Industrial Park in over 6 thousand villages under the Surali Gaon Yojana.

“With the participation of villagers including women and youth, the green energy would be produced in Chhattisgarh. It’s an step towards realising Gandhiji’s dream of Gram Swaraj. The cow dung procured from the dairy-owners and farmers under the ‘Gaudhan Nyay Yojana’ will be used to generate power”, said the chief minister.

Bio gas plants, scrubbers and gen-sets have been set up in Gauthans to generate electricity from cow dung. Biogas, a mixture of colourless flammable gases (including methane, carbon dioxide and other traces) are prepared by adding cow dung and water in the biogas tank. The methane gas is made available through the process from which electricity is generated by running the gen-sets.

“The state has been preparing for the project for the past several months. All measures have been accomplished for electricity production from the cattle-dung in most of the working Gauthans”, the official spokesperson said.

One unit will produce 85 cubic metres of gas and every cubic metre will generate 1.8 KW of electricity. So 153 KW of power is expected to be produced from one installed unit in a Gauthan. After the production of power from each unit, the remaining slurry water will be used for irrigation and further get the organic manure from the remaining residue.

The state government has approved the creation of 10112 Gauthans for conservation and sustenance of livestock in rural areas. 6112 Gauthans are already under operation.

According to the officials, the state has so far purchased over 51 lakh quintal of cow-dung and in return paid Rs 102 crore online to the cattle-dairy owners and villagers.