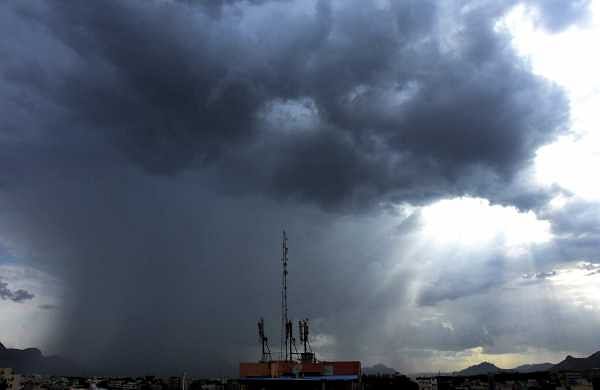 AURANGABAD: Marathwada, which is considered a drought-prone region in Maharashtra, has received 1,041.5 mm rainfall during the monsoon season this year as against its average of 679.5 mm, while parts of it continue to get pounded by heavy rains, an official said on Saturday.

The region has received 153.27 per cent rainfall so far, he said.

Officials have earlier said that at least 91 people have died, while over 25 lakh hectares of farmland were destroyed due to excess rainfall in Marathwada in the last four months.

“Isolated parts of four districts in Marathwada received heavy rainfall between Friday and Saturday. The highest rainfall of 107. 25 mm was recorded at Vihamandwa circle of Paithan tehsil in Aurangabad district in 24 hours ending 12 pm on Saturday,” the revenue department official said.

The official said that above-65 mm rainfall was recorded in 12 circles in Aurangabad, Beed, Jalna and Parbhani districts starting Friday.

Water-logging and flooding occurred in Naregaon area of Aurangabad due to heavy rains, he added. The water level of Jayakwadi dam, the biggest in the region, reached 99.06 per cent on Saturday morning.

Eighteen gates of the dam were lifted to a height of 1.5 feet and the water discharge has been increased by 9,432 cusec with a total discharge of 28,296 into Godavari river, an irrigation official said.

Aurangabad guardian minister Subhash Desai on Friday took stock of the rain situation in the district via video-conferencing.

Talking about the review meeting, collector Sunil Chavan later said in a video message, “63,000 farmers in the district have faced losses due to heavy rains in the last week of September. Fourteen deaths were reported (in the district) since June 1 in rain-related incidents. Aid of Rs four lakh each has been provided to the kin of the seven victims so far.”