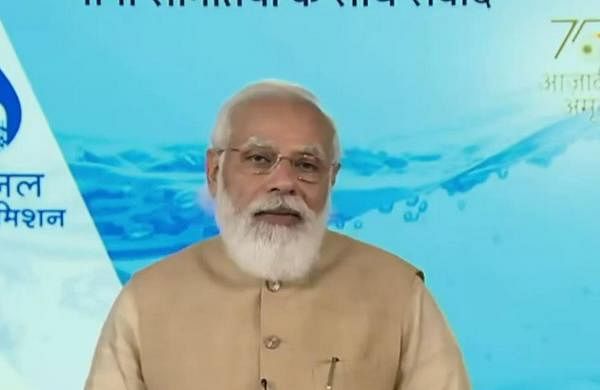 NEW DELHI: Prime Minister Narendra Modi on Saturday launched the Jal Jeevan Mission mobile application – which aims to improve awareness among stakeholders and for greater transparency and accountability of schemes under the initiative.

The Prime Minister said that the Jal Jeevan Mission has been empowering women of the country by saving their time and efforts which was earlier consumed in covering long distances to fetch drinking water.

During an interaction with the Prime Minister, various Gram Panchayat heads and Pani Samitis/ Village Water and Sanitation Committees (VWSC) representatives told PM Modi that through the Jal Jeevan Mission every household in their villages has now a tap connection that provides them with clean drinking water.

During the interaction, the Prime Minister was informed that women in villages now invest their time in educating their children and participating in other activities which generate income.

On the 150th anniversary of Mahatma Gandhi PM Modi also launched Rashtriya Jal Jeevan Kosh, where any individual, institution, corporate, or philanthropist, be it in India or abroad, can contribute to help provide tap water connection in every rural household, school, anganwadi centre, ashramshala, and other public institutions.

According to a statement issued by the Prime Minister’ Office on Friday, nationwide Gram Sabhas on Jal Jeevan Mission will also take place during the day today. The Gram Sabhas will discuss planning and management of village water supply systems and also work towards long-term water security.

Out of over 6 lakh villages, Pani Samitis/ VWSCs have been constituted in around 3.5 lakh villages. More than 7.1 lakh women have been trained to test the quality of water by using Field Test Kits.

On August 15, 2019, Prime Minister announced the Jal Jeevan Mission to provide clean tap water to every household. At the time of the launch of the mission, only 3.23 Crore (17 per cent) rural households had a tap water supply.

Despite the COVID-19 pandemic, in the last two years, more than 5 Crore households have been provided with tap water connections. As of date, about 8.26 Crore (43 per cent) rural households have a tap water supply in their homes.

Every rural household in 78 districts, 58 thousand Gram Panchayats and 1.16 lakh villages are getting tap water supply. Till now, tap water supply has been provided in 7.72 lakh (76 per cent) schools and 7.48 lakh (67.5 per cent) anganwadi centres.

To realize the Prime Minister’s vision of ‘Sabka Saath, Sabka Vikas, Sabka Vishwas, Sabka Prayas’, and following the ‘bottom up’ approach, Jal Jeevan Mission is implemented in partnership with States with a budget of Rs. 3.60 lakh Crores.

Further, Rs. 1.42 lakh Crore has been allocated to PRIs as a tied grant under the 15th Finance Commission for water and sanitation in villages for the period 2021-22 to 2025-26.