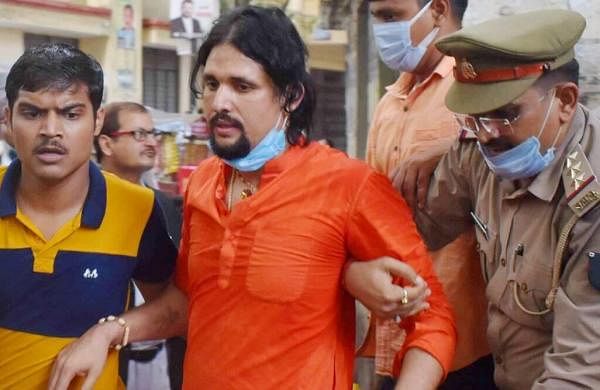 DEHRADUN: After grilling six people for 16 hours, a CBI team on Thursday seized ‘incriminating’ documents, a laptop left from Haridwar with Anand Giri for Prayagraj on Thursday.

The eight-member CBI team arrived in Haridwar on Wednesday with Anand Giri, a disciple of deceased Mahant Narendra Giri, at around 7 pm on Wednesday.

A member of the local police team, comprising over a dozen members including circle officer Abhai Singh, said, “The team conducted the search operations in the ashram extensively, questioned six people, and seized a laptop and a lot of many documents.”

The team took the accused Anand Giri to his ashram in Gajiwali village of Haridwar on the bank of river Ganga where the search was conducted for more than 7 hours resulting in the recovery of a laptop and documents.

The agency is looking for an alleged video that was to be released to defame Mahant Narendra Giri as mentioned in his suicide note too.

The team also questioned six people which included some ‘disciples’ of the accused Anand Giri.

Mahant Narendra Giri, president of the Akhil Bhartiya Akhada Parishad, top body of all 13 prominent akhadas of India, had committed suicide by hanging in Baghambari Mutt in Prayagraj, Uttar Pradesh.  He had named Anand Giri along with two others for abetment to suicide in his five-page note.