Group of Chhattisgarh Congress MLAs camps in Delhi, one of them says no question of leadership change 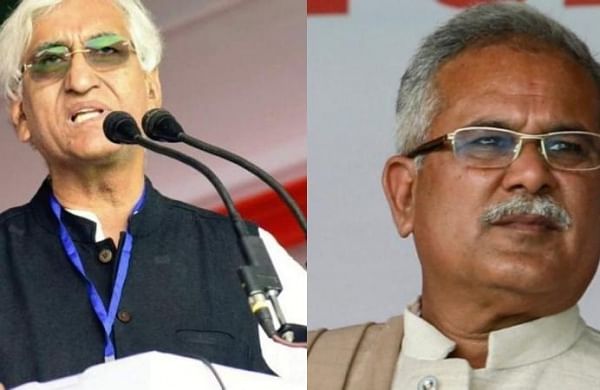 NEW DELHI/RAIPUR: Amid speculation over the possibility of a leadership change in Chhattisgarh, a group of Congress MLAs known to be close to Chief Minister Bhupesh Baghel are camping in Delhi but the CM and cabinet minister T S Singhdeo both downplayed the development on Thursday.

However, one of the MLAs camping in Delhi, Brihaspat Singh, asserted that there was no question of a change at the top in the state and Baghel would complete his full term.

Around 15 party MLAs are in Delhi and they want to meet AICC in-charge of Chhattisgarh P L Punia to convey that Rahul Gandhi should extend the duration of his proposed tour to the state so that all MLAs can get benefit of it, said Singh, the party MLA from the Ramanujganj seat of the state.

When contacted, Punia said he was in Lucknow and had no information about the MLAs being in Delhi as none of them had contacted him.

The AICC in-charge of the state said he had no plans to return to Delhi at least for a week.

Singh, however, insisted that they are waiting for Punia and will speak with him when he returns.

Asked about the MLAs’ visit, Baghel told reporters in Raipur, “Tell me one thing – can’t legislators go anywhere. Every step should not be seen as politics. Anybody can go anywhere. Even you (mediapersons) tour with your friends and it doesn’t mean every time the purpose is getting news.”

Similarly, if anyone has gone to Delhi it should not be seen through political prism, said the CM.

Downplaying the development, Singhdeo said in Raipur, “All 70 MLAs can go. What is the issue if MLAs go to Delhi. All this went on in Uttar Pradesh also, what is new that is happening in Chhattisgarh.”

He said it is the view of all MLAs that everyone would abide by the decision of the high command.

The demand for a change of guard reared its head in Chhattisgarh after Baghel completed two-and-a-half years as chief minister in June 2021.

The Singhdeo camp claimed that the high command in 2018 had agreed to hand over the post to him after the government completed half its term.

Punia has time and again denied that any such deal was struck in 2018 when the party came to power by dislodging the BJP.

The Congress high command summoned both Baghel and Singhdeo to Delhi in August to resolve the feud.

Asked whether the visit of the MLAs was aimed at expressing support to Baghel amid buzz of leadership change, Singh said their visit was aimed at conveying to the high command that Gandhi should extend the duration of his proposed tour, but added that there was no possibility of a leadership change.

“The situation in Chhattisgarh is not like that of Punjab. Our party has 70 MLAs (in the 90-member state assembly), of whom 60 legislators had last time told everything to Punia ji and the high command,” Singh told PTI.

“The high command gave a chief minister from the OBC community to the state with 54 per cent OBCs. The high command gives the example of Chhattisgarh government’s policies during elections in other states, so there is no such question (of leadership change),” Singh said.

“Our Maharaja of Sarguja is very intelligent, very knowledgeable and has himself stated that he will never leave the party. So there is no possibility and under the leadership of Bhupesh Baghel, together with T S Singhdeo, the government will continue to work for the development of the state,” the MLA said.

The buzz in political circles in Chhattisgarh over legislators having gone to express their support to Baghel comes in the wake of the Punjab political crisis for the party.

Plunging the Congress into a fresh crisis months ahead of the Punjab Assembly polls, Navjot Singh Sidhu quit as the party’s state unit chief on Tuesday, shortly after the allocation of portfolios among the members of the new state cabinet led by Chief Minister Charanjit Singh Channi.

It appeared that Baghel had managed to avert for the time being a leadership change when he told reporters in Raipur recently that party leader Rahul Gandhi had agreed to visit the state “on his invitation”, and those talking about rotating the CM’s post were promoting political instability.

However, there has been constant speculation over the matter.

Meanwhile, speaking at the PHD Chamber Annual Session, Baghel listed the achievements of his government and asserted that because of the emphasis on strengthening the rural economy of the state, Chhattisgarh had made economic progress despite the problems posed by the coronavirus pandemic.

The Chhattisgarh CM also said agriculture was the most crucial sector in India and if the country’s economy was recovering from the Covid jitters it was because of this sector.