Congress manifesto to have issues of farmers, homebuyers in Noida as Priyanka targets UP cops 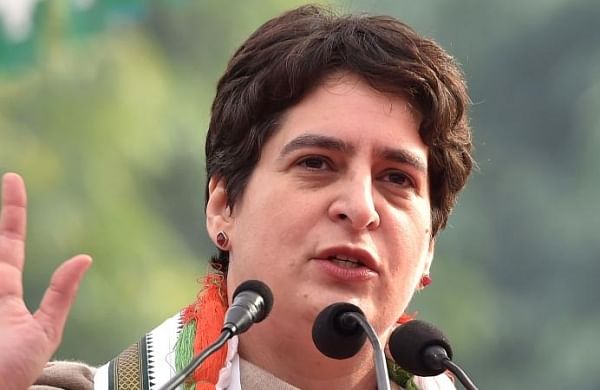 NOIDA: Congress general secretary Priyanka Gandhi Vadra has assured that issues of farmers and homebuyers here will be included in the manifesto for Uttar Pradesh Assembly polls, party office-bearers said here on Wednesday.

Farmers from villages in Noida and Greater Noida have been protesting for a long time over various demands, including hiked compensation for their land, while thousands of homebuyers are suffering due to a delay of several years in getting possession of their flats, they said.

The deputy chief of the party’s social media unit in the state, Pankhuri Pathak, and leader Anil Yadav in Lucknow met Priyanka, who is on a five-day tour of Uttar Pradesh.

“Various issues concerning Noida were discussed during the meeting and we apprised them of the problems of the residents here. These include the continued protest by farmers and the homebuyers as well,” Pathak said.

Yadav said during the meeting, the party general secretary also raised concern over the growing unemployment, poor law and order situation and women safety issues in the state.

“She has instructed party workers in Noida to keep raising these issues, particularly concerning unemployment and women safety,” he said.

The Uttar Pradesh Police is “soft” on criminal and “brutal” with common people, alleged Congress general secretary Priyanka Gandhi Vadra on Wednesday commenting over the death of a Kanpur businessman after he was allegedly thrashed by policemen.

Manish Gupta (36) died in a Gorakhpur hotel during a police raid, prompting the authorities to suspend six policemen and booking them on the charge of murder.

Gupta was staying along with two friends in the hotel.

Police had earlier denied the charge and said he received a head injury after he fell on the ground as he was in a drunk.

Samajwadi Party (SP) president Akhilesh Yadav said the incident was the result of the “encounter culture” of the state government.

According to reports, a businessman in Gorakhpur was beaten up by police after which he died, Priyanka said.

“The state of jungle law is such under this government that police are soft on criminals and behave barbarously with common people,” the Congress leader said in a tweet.

Reacting to the incident, Mayawati in a Hindi tweet said, “The barbaric act against three businessmen during a raid in a hotel in the CM’s home district is very said and shameful.”

“It exposes tall claims of the BJP on law and order. In reality, the entire state is facing such incidents,” she said.

“The state government should provide justice to every victim’s family and ensure that such incidents do not happen again,” she added.

SP chief Akhilesh Yadav in a tweet on Tuesday alleged that the incident is the result of the “encounter culture”.

“Those involved should face trial and those who pushed the state on the path of violence should resign,” he said.