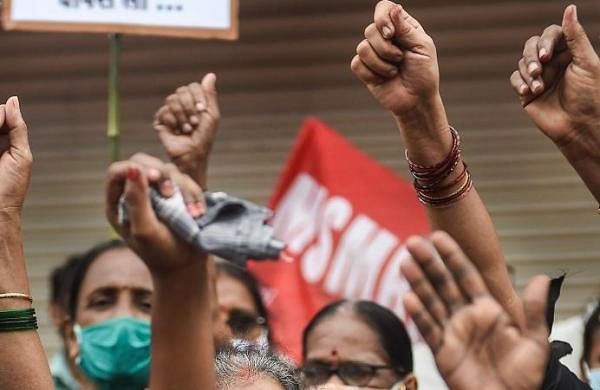 JAIPUR: The effect of the “Bharat Bandh” called by farmers against three agriculture laws of the Centre was visible in many districts of Rajasthan, including agriculture-dominated Ganganagar and Hanumangarh where the major mandis and markets remained closed.

Farmers took out rallies on the major roads and held meetings.

The Samyukta Kisan Morcha (SKM), which is leading the agitation against the three farm laws, has given the call for a “Bharat Bandh” to be observed on Monday.

The effect of the shutdown was visible in many districts of the state, including Ganganagar, Hanumangarh, Bikaner, Sikar and Nagaur.

Mandis and markets were partially closed in the cities and towns of these districts. The agitating farmers blocked the major roads and held meetings. The bandh also affected train services in the border districts.

In Jaipur, farmers led by the Bharatiya Kisan Union (BKU) took out a rally on tractor-trolleys.

ALSO READ | Ready to agitate for 10 years, but won’t allow farm laws to be implemented: Rakesh Tikait ahead of ‘Bharat Bandh’

Enacted in September last year, the three farm laws have been projected by the Centre as major reforms in the agriculture sector that will remove the middlemen and allow farmers to sell their produce anywhere in the country.

However, the protesting farmers have expressed their apprehension that the legislations would pave the way for eliminating the safety cushion of Minimum Support Price (MSP) and do away with the “mandi” (wholesale market) system, leaving them at the mercy of big corporates.