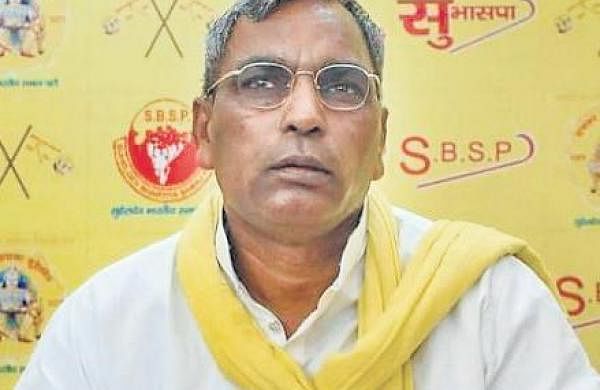 BALLIA: Suheldev Bharatiya Samaj Party (SBSP) chief Om Prakash Rajbhar on Wednesday claimed that Bhim Army chief Chandrashekhar Azad will soon be a part of the Bhagidari Sankalp Morcha and a formal announcement in this regard will be made at a rally on October 27.

The morcha is a front of like-minded political parties led by Rajbhar, a former BJP ally.

I had a meeting with AIMIM chief Asaduddin Owaisi and Bhim Army chief Chandrashekhar Azad Ravan in Lucknow on Tuesday which was very fruitful.

The Bhim Army chief has given his consent to join the Bhagidari Sankalp Morcha, Om Prakash Rajbhar told PTI here.

The AIMIM had recently announced that it would contest 100 seats in the state assembly polls next year by tying up with Rajbhar-led SBSP and its Bhagidari Sankalp Morcha.

Rajbhar, who was a cabinet minister in the Yogi Adityanath government, had resigned before the Lok Sabha polls in 2019.

He had later launched the Bhagidari Sankalp Morcha as a political front of smaller parties.

Rajbhar said during the talks with both the leaders, the strategy regarding the upcoming elections in the Uttar Pradesh was discussed and it was decided that the first major rally of the morcha will be held at Haldharpur in Mau district on October 27 on the foundation day of SBSP.

During this rally, the Bhim Army chief will formally make an announcement on joining the morcha, he said, adding that the next rally would be held on November 27 at Sandila in Hardoi district.

More rallies have been planned for Kanpur, Moradabad and Basti later.

Besides Owaisi and Azad, leaders of all the parties in the morcha will address these rallies, he said.

The Uttar Pradesh-based Bhim Army was found in 2014 to fight for Dalit rights.

Asked if the Vikassheel Insan Party will also be joining his morcha, Rajbhar said its president and Bihar cabinet minister Mukesh Sahni has informed that he will clarify his stand by October 15.

The SBSP chief said he was hoping that Sahni would attend the October 27 rally.

Asked about an alliance with the Samajwadi Party, Rajbhar said he has not yet met its national president Akhilesh Yadav or talked to any party leader on the issue.

The SBSP had contested the 2017 Assembly polls in alliance with the BJP and won four seats.

The Rajbhars constitute 20 per cent of the Poorvanchal population and are regarded as the second-most politically dominant community after the Yadavs in eastern Uttar Pradesh.