UP assembly polls: AAP takes out ‘Tiranga Yatra’ in Ayodhya 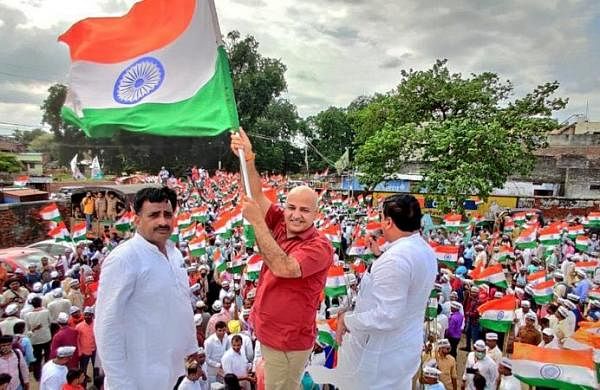 LUCKNOW: The Aam Admi Party (AAP) seeking to make distinct inroads into the political landscape of Uttar Pradesh in 2022 assembly polls, kick-started a Tiranga Yatra in the temple town of Ayodhya on Tuesday.

The Yatra was launched by AAP leader and Delhi Deputy Chief Minister Manish Sisodia along with the party’s UP in-charge and Rajya Sabha member Sanjay Singh. The two leaders had visited Ram Janmabhoomi and Hanumangarhi temple in Ayodhya on Monday.

According to AAP sources, earlier the Yatra, which was planned for Noida and Lucknow only, will now be organised across all districts of UP in the next two months. “AAP’s Tiranga Yatra is getting an overwhelming response everywhere. After Ayodhya, Tiranga Yatra will be taken out in the entire Uttar Pradesh. Yatra will aim to bring in a new politics of development and honesty in the state,” said Sanjay Singh.

However, making its stand clear on poll strategy, Delhi Deputy CM Manish Sisodia said that AAP would go it alone in UP assembly elections in 2022. “AAP will field candidates on all 403 seats and there will be no alliance with any other party,” said Sisodia after the conclusion of the Yatra.

During the 2014 Lok Sabha election, the AAP had contested 77 seats and lost its deposit on 76. The party then contested the 2017 local body elections when it fielded 3,400 candidates. It managed to win 44 seats and finished fifth. In the 2019 Lok Sabha election, the party failed to open its account and all its candidates lost their deposits. Earlier, there had been reports of AAP holding talks with O.P. Rajbhar’s Bhagidari Sankalp Morcha. Sanjay Singh had also met SP chief Akhilesh Yadav in July, triggering the speculations of a possible alliance.