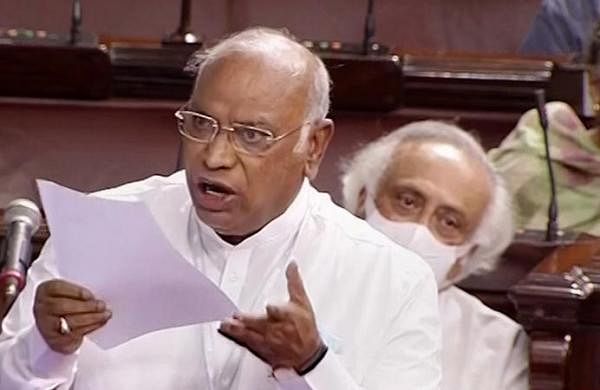 NEW DELHI: Congress has refused to be a part of the proposed inquiry committee of MPs being set up to investigate the violent incidents that took place in the House during the monsoon session on August 11.

According to sources, Leader of the Opposition Mallikarjun Kharge in a letter to Rajya Sabha chairperson M Venkaiah Naidu, said, “Constituting an inquiry committee on the incidents of August 11, 2021, seems to be designed to intimidate MPs into silence. It will not only suppress the voices of the people’s representatives but will deliberately brush aside all those that are uncomfortable to the government.”

“I am, therefore, unequivocally against constituting the enquiry committee and the question of a party proposing the name of a member from a party for nomination to this committee does not arise,” he said.

The Congress leader said the opposition was keen to participate in discussions and claimed that it was the government that obstructed the smooth functioning of the session.

Kharge, also said in the letter that the government not only brushed aside the opposition parties’ demand for discussion but also rushed through crucial bills and policies, which could potentially have a grave and adverse effect on the country.

The leader of the opposition pointed out that his party gave multiple notices under the rules of procedure, hoping to have constructive deliberations on the state of India’s economy, farmers protest, inflation, rise in prices of petrol and diesel and other essential commodities, unemployment, China’s violation of India’s territorial integrity, the Pegasus and Rafael scandals among a host of other national issues.

“It also bypassed standing committees and refused to have any meaningful discussion on bills, policies and issues. Additionally, senior ministers were largely absent from Parliament while opposition MPs were suspended. In doing so, the government undermined the sovereignty of Parliament,” the letter said.

Kharge also said that he has spoken to other opposition parties in this regard and almost all of them have rejected the inquiry committee proposal.

On August 11, there was turmoil in the Rajya Sabha with the opposition alleging misbehaviour by marshals, while the ruling party alleged violence against parliament staff and others by opposition MPs.

Two Congress women MPs, Phulo Devi and Chayya Varma had alleged that they were manhandled during the ruckus in the House.

As per official sources, an official complaint has been lodged against the MPs who created ruckus in Rajya Sabha during the recently concluded monsoon session.

At the Rajya Sabha Chairperson and Union ministers’ meet, it was decided that a committee will be formed and action will be taken after discussion.

All through the session that began on July 19, opposition members forced adjournments in both Lok Sabha and Rajya Sabha over their various demands including a probe into allegations of surveillance through Pegasus spyware and repeal of three farm laws.

Both the Lok Sabha and the Rajya Sabha were adjourned sine die two days ahead of the scheduled end of the Monsoon session on August 13.