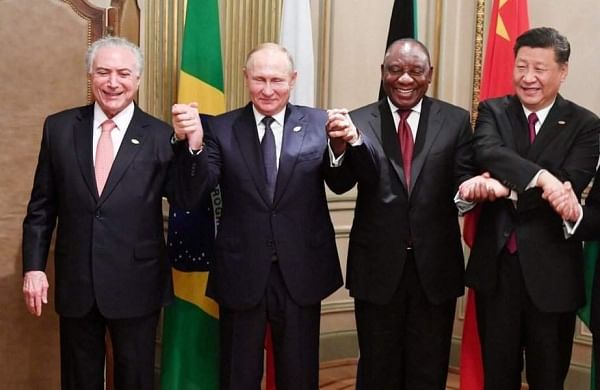 NEW DELHI: Countering terror, particularly in the context of the Afghanistan upheaval, dominated discussions on Thursday at the five-nation BRICS virtual summit chaired by India, with all heads of state collectively agreeing to combat the export of terror and cooperate to mitigate the humanitarian crisis in the war-torn country.

“We call for refraining from violence and settling the situation by peaceful means. We stress the need to contribute to fostering an inclusive intra-Afghan dialogue so as to ensure stability, civil peace, law and order in the country. We underscore the priority of fighting terrorism, including preventing attempts by terrorist organisations to use Afghan territory as terrorist sanctuary and to carry out attacks against other countries, as well as drug trade within Afghanistan. We emphasise the need to address the humanitarian situation and to uphold human rights, including those of women, children and minorities,” a joint declaration adopted at the end of the summit, called the New Delhi Declaration, stated.

Secretary (CPV) in the ministry of external affairs, Sanjay Bhattacharya, said there was strong consensus on condemning terrorism, including cross-border terror, terror financing and the springing up of radical organisations.

Bhattacharya said many agreements, including the one calling for reforms of multilateral organisations, remote sensing satellite constellation, agriculture reforms and cooperation and some others related to the New Development Bank (NDB) were finalised or endorsed during the summit attended by Chinese President Xi Jinping, Russian President Vladimir Putin, South African President Cyril Ramaphosa and Brazilian President Jair Bolsonaro.

In his opening address, Prime Minister Narendra Modi said BRICS has adopted a counter-terrorism action plan that was drawn up by national security advisors of the member states. Putin said the situation in Afghanistan must not become a threat to its neighbours. “Russia, just like its BRICS partners, consistently supports the establishment of the long-awaited peace and stability in Afghanistan.”