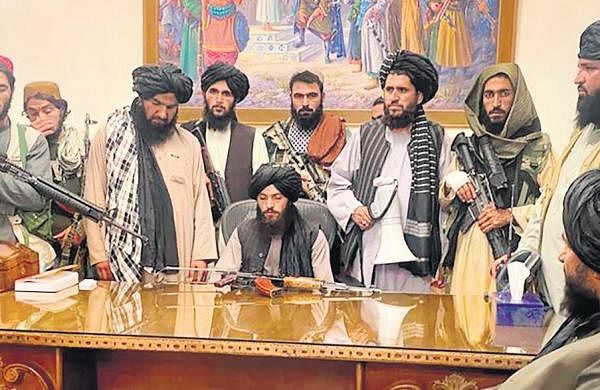 NEW DELHI:  With the Taliban appointing several UN-sanctioned terrorists in its Cabinet, including Siraj Haqqani of the Haqqani Network, security concerns have grown in New Delhi. Experts believe the Taliban’s move was not surprising and that New Delhi would be prepared to deal with the new Taliban government in Afghanistan despite the presence of Haqqani, who is considered close to the ISI and Al-Qaeda.

“There is a wider section of people asserting that the Taliban government will lead to augmented insecurity in India. However, the situation is still unfolding and there are strong apprehensions that the Afghanistan-Pakistan border will become more volatile and force Islamabad to maintain its focus more in that region. More importantly, it is pertinent to recall that the biggest threat to Indian security for long has been from ISI, which has used its terror proxies operating out of Pakistani soil against India,” said Ajit Kumar Singh, Research Fellow at the Institute of Conflict Management.

“There was never a period when ISI was not relentless in its nefarious design to destabilise India. Yet, India has minimised the threat due to the security establishment attuning itself as per demands of the new challenges,” added Singh.

Russia-based analyst Andrew Korybko said although New Delhi may have concerns over Haqqani’s presence in the Cabinet, it cannot do anything about it. “At most, New Delhi can refuse to recognise the acting government or pragmatically engage with it while pressuring others to do the same. But if someone else decides to still engage with it, India will be powerless to stop them. It can only rely on informational means to discredit these authorities,” he said.

Singh thinks the Indian security establishment has gained experience in counter-terrorism. “Consequently, there is no such imminent threat due to change of guard in Afghanistan. But there is no scope for complacency and vigil on ground must be increased.”

Security concerns have been high since Tuesday after the Taliban declared the formation of its government. Haqqani’s inclusion caught the attention of officials in New Delhi as his group had been involved in bombing at the Indian Embassy in Kabul. He is known to have close ties with anti-India organisations.

A former diplomat, who did not wish to be named, said there was no surprise in the inclusion of UN-sanctioned terrorists. “I am sure this came as no surprise to New Delhi. The challenge now will be to make sure that Afghan soil is not used by anti-India organisations to spread terror. India must keep engaging with the Taliban and also partner countries to put pressure on them to ensure that Afghan soil does not become a safe haven for terrorists,” he said.