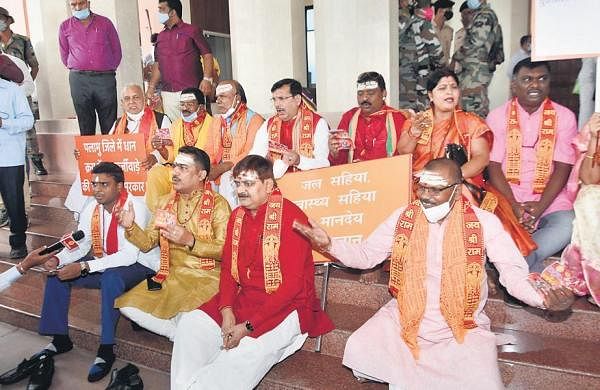 RANCHI: Amid a raging controversy over allotment of a ‘Namaz’ (Islamic prayer) room in the Jharkhand Assembly, Speaker Rabindra Nath Mahto on Thursday formed an all party, 7-member panel, on the last day of the Monsoon session to look into the issue and come out with a report within 45 days.

The Monsoon session that began on September 3 remained stormy and witnessed protests by the main opposition BJP over the allotment both inside and outside the House.

Amid ruckus by the opposition, Speaker Mahto said “disruptions” over the issue impacted Assembly as well as the state, sending a wrong message to masses.

“We need to end the standoff in the interests of the State and its people. It is not good for MLAs as well. Under the circumstances, I took a decision to place the matter before an all party committee and the Chair will support whatever decision is given by it,” the Speaker said.

Fixing a deadline of 45 days for the 7-member panel with legislator Stephen Marandi as its convener, the Speaker asked the panel to come out with its report at the earliest.

Earlier, ruling party MLA Sarfaraz Ahmad made a proposal that Speaker should form a committee to study whether there is a need for a Namaz room.

BJP member and former Chief Minister Babulal Marandi objecting to a statement that a ‘Namaz’ room was allotted during his term as CM, said “no such allotment was made while I was CM.

Constitution of India does not permit it.

BJP members also staged a dharna outside the Assembly.

Police had used water cannons and batons on Wednesday to break up protests by the BJP against allotment of the ‘Namaz’ room.

A row broke out in Jharkhand after the assembly speaker allotted a room in the Assembly for offering ‘Namaz’ through a notification last week.

The opposition leaders have been protesting against the decision, calling it “unconstitutional.”

They are also demanding a separate hall for chanting “Hanuman Chalisa” (prayers to Lord Hanuman).

Do not upset farmers of Punjab, a border state: NCP supremo Sharad Pawar’s advise to Centre

I insisted that Uddhav become CM of Maharashtra when MVA was formed: Pawar’s snipe at Fadnavis