Religion over democracy? Calls for Hanuman Chalisa, Namaz rooms pop up in Bihar, UP Assemblies 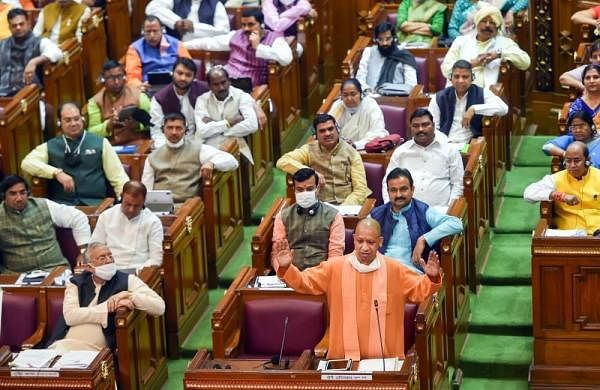 PATNA: Amid the row over the allocation of a separate room for offering Namaz inside Jharkhand Assembly premises, a BJP MLA from Bihar’s Darbhanga district on Tuesday demanded space in the Bihar Assembly to recite the ‘Hanuman Chalisa’.

Speaking to the media, Hari Bhushan Thakur, BJP MLA from Bisfi constituency in Darbhanga district said everyone is equal before the Constitution and if a Namaz room is being allocated in Jharkhand, then there should be room to recite the ‘Hanuman Chalisa’ in Bihar as well.

“If a room is allocated (in Jharkhand Assembly) to offer Namaz in the secular country, why shouldn’t there be room to chant ‘Hanuman Chalisa’? All sections of society are equal before the Constitution,” said Thakur.

The BJP MLA added that he will meet the Bihar Assembly speaker soon in this regard.

The Jharkhand Assembly witnessed uproarious scenes over the issue of allotment of space for Namaz in assembly premises during the last two days of the monsoon session.

In an order issued on September 2, the Jharkhand Legislative Assembly Secretariat stated that room number TW 348, in the new Assembly building of Jharkhand, has been allotted to offer the Namaz.

Meanwhile, Samajwadi Party MLA Irfan Solanki on Tuesday demanded a similar prayer room for Muslims in the Uttar Pradesh Assembly building and urged the Speaker to consider it.

However, UP Legislative Assembly Speaker Hriday Narayan Dixit, when contacted, told PTI that he had not received any communication from the MLA in this regard and a decision on any such demand will be taken as per law.

Solanki, a member of the legislative assembly from the Sisamau constituency in Kanpur, said, “I am an MLA for the past 15 years.

Many times when assembly proceedings are going on, we Muslim MLAs have to leave the assembly to offer namaz.

“If there is a small prayer room in the Assembly we won’t have to leave proceedings. On many occasions if you have a question in the pipeline and it is the time for ”azaan” (prayer call), you can either ask the question or offer namaz,” he said.

“Even at international airports, there is a room for ‘ibadat’ (prayer). The Assembly Speaker can consider this and its will not cause any loss to anyone,” Solanki said.

The MLA, however, told PTI that he has not given any request in writing to the Speaker in this regard.

When asked about it, Speaker Dixit said, “He (Irfan Solanki) has not given me any letter in this regard, nor any discussion was held in this regard.”

Asked whether a room for namaz will be set up if Solanki submits a request, Dixit said, “Discussions will be held with officials in this regard, and a decision as per law will be taken.”

Solanki’s demand came amid a controversy over the allotment of a room for offering namaz in the Jharkhand Assembly building by the Speaker, with the BJP protesting against the move.

The ruling Jharkhand Mukti Morcha and Congress have welcomed it.

A notification dated September 2 and signed by Jharkhand Legislative Assembly Deputy Secretary Naveen Kumar by order of the Speaker said, “Allotment of room number TW 348 as Namaz Hall for offering Namaz in the new Assembly Building.” The opposition BJP created a ruckus over the issue, disrupting proceedings for the second day in the Jharkhand Assembly.

The party is demanding that the order be recalled or else a Hanuman temple and places of worship of other religions also be allowed on the assembly premises.

The government must immediately revoke the “unconstitutional and undemocratic decision” on the namaz room, the saffron party has said.