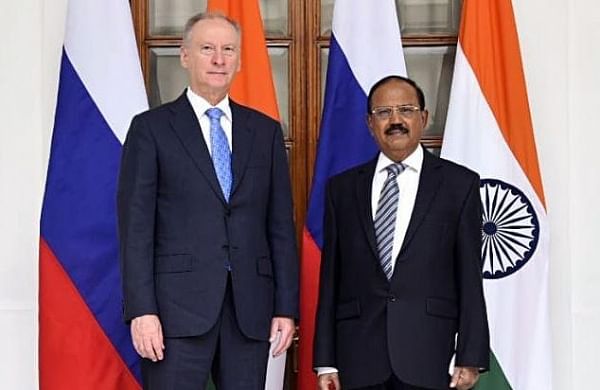 NEW DELHI: NSA Ajit Doval and his Russian counterpart Gen Nikolay Patrushev on Wednesday held wide-ranging talks on the possible security implications of the Taliban’s capture of power in Kabul for India, Russia and the Central Asian region, people familiar with the development said.

The meeting took place a day after Doval held extensive talks with Chief of the Central Intelligence Agency (CIA) William Burns on the Afghan crisis.

It is learnt that the CIA Chief, accompanied by a few officials, paid a quiet visit to India primarily to discuss the situation in Afghanistan after the US pulled out its troops.

When asked about the visit, the US embassy declined to comment.

There was no comment from the Indian security establishment as well.

In the Doval-Patrushev talks, both sides deliberated on a coordinated approach in dealing with any possible spilling out of terrorist activities from the Taliban-ruled Afghanistan into India, Russia and the Central Asian region, the people cited above said.

They said both sides exchanged each other’s assessment on possible security implications of the Taliban’s capture of power in Kabul and how a coordinated approach can be followed to confront any possible challenge.

The delegation-level talks would review the activities of terrorist groups including Jaish-e-Muhammad and Lashkar-e-Toiba that have a strong presence in Afghanistan, said one of the people.

Both India and Russia share similar concerns on terrorism that could flow out of Afghanistan.

The people said the two sides also deliberated on threats from drugs networks operating from Afghan territory, the role of regional countries and details of Indo-Russia cooperation to meet the current and future challenges.

The consultations reflect the close, trusted, special and privileged strategic partnership between India and Russia that has significantly matured over time, they said.

Prime Minister Narendra Modi and Russian President Vladimir Putin had on August 24 discussed the developments in Afghanistan and expressed the view that it was important for the two countries to work together.

On Tuesday, the Ministry of External Affairs said Patrushev is visiting India at the invitation of Doval for the high-level India-Russia inter-governmental consultations on Afghanistan.

“The consultations are a follow-up to the telephone conversation between Prime Minister Narendra Modi and President of the Russian Federation Vladimir Putin on August 24,” the MEA said.

After the Modi-Putin conversation, Russia said the two leaders expressed the intention to enhance cooperation to counter the dissemination of “terrorist ideology” and the drug threat emanating from Afghanistan and agreed to form a permanent bilateral channel for consultations on the issue.

On Monday, Russian envoy Nikolay Kudashev said that there is “ample scope” for cooperation between India and Russia on Afghanistan and both sides have been in regular touch with each other on the latest developments in the war-torn country.

He also said that Russia is as concerned as India that the Afghan soil should not be a source of spreading terrorism to other countries and there is a “danger” of terror being spread to the Russian territory as well as Kashmir.

The Russian ambassador also said that there is not much difference in the overall position of Russia and India on Afghanistan and noted that Moscow’s approach in according recognition to a Taliban regime would depend on its actions.

Russia has been a key player in pushing for the Afghan peace process before the Taliban captured power in Kabul.