Owaisi sounds poll bugle in Ayodhya, party to contest 100 seats in UP

2022 UP polls, AIMIM, Asaduddin Owaisi, UP assembly elections, UP elections 2022 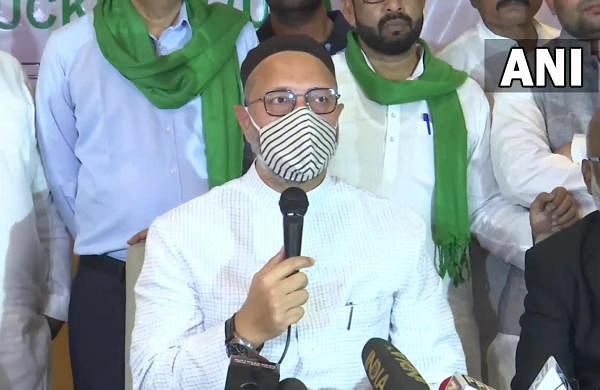 LUCKNOW: After inducting mafia don-turned politician Atiq Ahmad and his wife Shaista Parveen into All India Majlis-e-Ittehadul Muslimeen (AIMIM) in Lucknow on Tuesday, party chief Asaduddin Owaisi moved to Rudauli in Ayodhya to sound the poll bugle in Uttar Pradesh for the 2022 Assembly elections.

While Shaista Parveen took AIMIM membership in presence of Owaisi, her husband Atiq Ahmad, former SP MP, who is now in jail in connection with a number of criminal cases against him, joined the party in absentia.

While talking to the media persons after the new joinings, Owaisi took on Samajwadi Party (SP) and Bahujan Samaj Party (BSP) claiming that both the regional parties had used Muslims as mere slaves and never accorded them their due in governance after winning elections.

He justified the induction of Atiq Ahmad into AIMIM by saying that many BJP leaders were also facing several cases. “In UP, 37% BJP MLAs have criminal cases. Serious criminals cases have been lodged against 116 BJP MPs with most of them had cases related to crime against women,” Owaisi said.

The AIMIM chief also claimed that his party was prepared till the booth level to contest 100 out of total of 403 assembly seats in UP in 2022.

ALSO READ | Will ally only with small parties for Uttar Pradesh polls: Congress rules out tie-ups with SP, BSP

“Muslims used to do ‘gulami’ (slavery) of Samajwadi Party and BSP and raise slogans in their favour and to make their government. But when it comes to giving them participation, they are forgotten and forsaken,” said Owaisi adding that so far Muslims had been making others to win polls but now it was time to fight the election and win for themselves.

“When it comes to giving participation and representation to the Muslims, SP, BSP and AAP say it will increase communalism. The SP-BSP contested elections together, yet the BJP won. Muslims had given them votes. Where all those votes have gone?” he said.

Asserting that his party’s only motive was to ensure BJP’s defeat, Owaisi said he was with Suheldev Bhartiya Samaj Party (SBSP) of OP Rajbhar and other smaller groups of the Bhagidari Sankalp Morcha. On giving tickets to Hindus, Owiasi said, “The OBCs are our brothers, we will give tickets to Dalits too and they will win.”

Later in the day, Owaisi addressed a public rally in Rasulabad village in the Ayodhya district where he challenged the SP chief to hold a one-to-one debate with him on a public platform to prove his hollow promises done to Muslims of UP.

Rasulabad village falls in Rudauli tehsil area in Ayodhya and it is the only Muslim-dominated constituency in Ayodhya.

While announcing that AIMIM would contest the Rudauli seat, Owaisi urged the Muslims not to live in the shadows. “Have the Muzaffarnagar rioters been brought to justice? Why do Muslims in Ayodhya feel ashamed or apprehensive to even talk about the Babri demolition? All political parties have exploited Muslims and Dalits. Our party will hold majlis in every household,” said Owaisi at the public meeting.