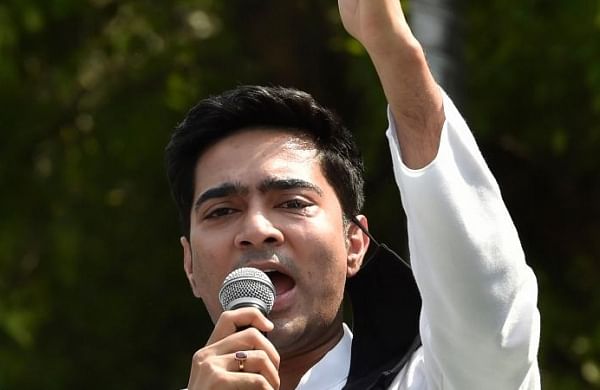 Abhishek Banerjee, TMC MP and nephew of West Bengal Chief Minister Mamata Banerjee, was questioned for about nine hours by the Enforcement Directorate (ED) in Delhi on Monday in a money laundering case linked to an alleged coal pilferage scam in the state.

After the questioning, the TMC MP accused the Narendra Modi regime of harassing political opponents.

“However, we understand his frustration. He must have been tired after over 8 hours of questioning by the ED. It is an independent agency probing illegal money transactions. There is no role of the BJP in that. If he has complaints, why doesn’t he move the court?” BJP state president Dilip Ghosh claimed that the TMC sees conspiracy in everything.

TMC spokesman and state general secretary Kunal Ghosh said Abhishek Banerjee showed that the TMC won’t bow down to the pressure and threat tactics by the BJP government.

Stepping out from the agency’s Jam Nagar house office in central Delhi just before 8 PM, the 33-year-old MP hit out at the BJP, saying its “tyranny will be defeated” and the Trinamool Congress (TMC) will battle it out with “full vigour” against the party holding power at the Centre.

The MP from Diamond Harbour was grilled for close to nine hours after he entered the ED office shortly before 11 AM.

Officials said his statement was recorded under the Prevention of Money Laundering Act (PMLA).

He is understood to have been questioned about his links to the other accused involved in the case and in the context of two companies allegedly linked to his family in which some purported illegal transactions were done, they said.

The ED had filed the criminal case under the PMLA after studying a November 2020 FIR of the CBI that alleged a multi-crore coal pilferage scam related to Eastern Coalfields Ltd mines in the state’s Kunustoria and Kajora areas in and around Asansol.

“If BJP thinks that the Trinamool Congress will be scared or will bend, get defeated due to this (the ED case and questioning) or will sit at home like the Congress or any other party. We will fight out with you with full vigour and will go to each such state where you murdered democracy,” Banerjee, also the national general secretary of his party, told reporters outside the ED office.

‘”Apko jo ukhadna hai, aap ukhad lo (Do whatever you like). TMC will defeat the BJP in the upcoming polls,” he said.

A video link of this media interaction was also posted by the TMC on its official Twitter handle.

“The BJP’s tyranny will be defeated. Let BJP put all its might, vigour, threat, resources. Mind my words these resources are going to fall flat,” he said.

He continued: “We will give our lives, put our lives at stake but not bow down. We will not sell our spine to these autocrats, to these cowards who cannot defeat us politically.”

The West Bengal BJP had earlier said that the people of the state want the investigation in the case to be over within a time frame and the truth to unravel.

An alleged illegal coal operative of West Bengal, Anup Majhi alias Lala, is the prime suspect in the case.

The ED had claimed that Abhishek Banerjee was a beneficiary of funds obtained from this illegal trade.

His wife Rujira was also summoned by the agency in this case on September 1 but she did not appear citing the prevailing coronavirus situation and requested the agency to instead question her in Kolkata.

It is understood that the agency may grant her the relief.

Some Indian Police Service (IPS) officers and a lawyer linked to Abhishek Banerjee have also been summoned to appear on different dates in this month in the case.

Reacting to these summonses, Chief Minister Banerjee last week accused the Centre of letting loose its agencies on her nephew and claimed some BJP ministers were working “hand in glove” with the coal mafia.

The ED has arrested two people in this case till now.

One of them is Vikas Mishra, the brother of TMC youth wing leader Vinay Mishra, who is stated to have left the country sometime back and renounced his Indian citizenship.

The ED had earlier claimed that the Mishra brothers received “proceeds of crime worth Rs 730 crore on behalf of some influential persons and for themselves” in this case involving an estimated amount of Rs 1,352 crore.

A “deep system” of political patronage and a “well-oiled machinery” were used to brazenly carry out certain unlawful coal mining in West Bengal, the ED has claimed before a court while seeking the remand of Inspector Mishra in April.

A charge sheet was also filed by the ED in May this year.

Quoting the recorded statement of an unidentified “close associate” of Majhi, the ED had earlier alleged that prime suspect Majhi had been running his “illegal coal mining business smoothly by managing senior functionaries of a political party of West Bengal though Inspector Mishra”.

The agency had claimed that documents seized by it show that “Majhi assisted in transferring substantial funds derived from the proceeds of crime to Shri Abhishek Banerjee’s close relatives (wife and sister-in-law) at London and Thailand.