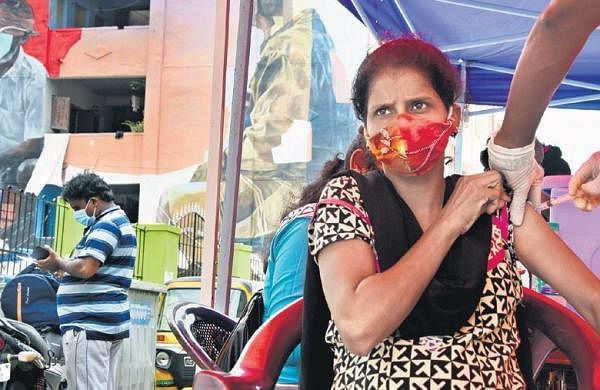 BENGALURU: The Karnataka government is working with a target to fully vaccinate the entire adult population against COVID-19 by the end of November, Health and Medical Education Minister K Sudhakar said on Monday.

In a video conference with Deputy Commissioners (DCs) and Zilla Panchayat CEOs of 23 districts, which are lagging behind in vaccination coverage, the minister said:”These 23 district administrations have been given a target to speed up coverage and complete the first dose for all by the end of this month. Target has been set to complete both the doses for all by November,” Sudhakar said.

Progress and achievement on testing, setting up of oxygen plants and other civil works were also discussed at the meeting, he added.

Noting that even last year the state government had allowed celebration of Ganesha festival, despite a higher number of COVID cases, the Minister said, “this year we have a positivity rate of 0.7 per cent and guidelines have been issued to ensure precautionary measures especially in public celebration.

” “We will review the situation district -wise and issue separate guidelines wherever the positivity is more than 2 per cent,” he was quoted as saying by his office in a release.

The government on Sunday had issued guidelines for the Ganesha festival celebrations limiting it to five days and prohibiting cultural programmes and processions.

Pointing out that a 12-year old boy who was detected with Nipah virus infection in Kerala has succumbed to it, Sudhakar said, “We have taken strict measures to ensure it doesn’t spread here. We also need to be vigilant to prevent a third wave of COVID.”