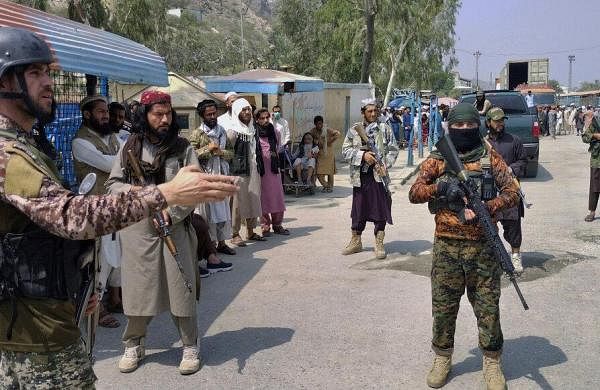 The meeting was held in the context of two developments — the Taliban claiming victory over the last pocket of resistance in Panjshir valley and ISI chief Lt Gen Faiz Hameed meeting Taliban’s de-facto leader Mullah Abdul Ghani Baradar on Monday.

The visit of ISI chief was the first high-level visit of any Pakistani official to Afghanistan since the Taliban took over Kabul on August 15.

Sources said the meeting deliberated on India’s position towards the Taliban and also on how to contain the presence of anti-India terror groups in Afghanistan.

Sources told this newspaper that Indian agencies are closely monitoring developments in Kabul, especially with the Taliban dithering over the issue of government formation.

A senior government functionary said New Delhi’s immediate focus is to ensure that Afghan soil is not used for terror activities against India and evacuations.

Earlier last week, Pakistani media had reported that a delegation of senior officials led by Lt Gen Hameed was in Kabul at the invitation of the Taliban, but the insurgent group said Islamabad had proposed his visit.

On Sunday, Taliban said that he was in Afghanistan “to improve bilateral relations between Kabul and Islamabad”.

As the situation in Afghanistan continues to be uncertain, the Union Home Ministry has said that no Afghan national living in India will be asked to leave the country without its approval, according to officials.

The MHA’s decision came about a fortnight after the Taliban’s takeover of Afghanistan and many Afghans arriving in India fearing retribution from that country’s new rulers.

No Afghan national will be asked to leave India by the Foreigners Regional Registration Office (FRRO) without prior approval of the home ministry and such cases will be referred to the MHA by the FRRO, a home ministry official said.

This came after a woman member of Afghan parliament, Rangina Kargar, was deported from Delhi’s IGI Airport to Istanbul despite valid papers.

The government had later apologised to Kargar.

The government has already extended visas of all categories granted to citizens of all countries, including Afghanistan, living in India on “gratis basis” till September 30.

Many Afghan nationals who came to India before the Taliban’s takeover of Afghanistan have been staying in India for more than six months now and, in many cases, since the first lockdown was announced in March 2020.

The MHA has decided to extend till September 30 the existing facility of deemed extension of regular visa or e-visa or stay stipulation period, without levy of any overstated penalty, granted to foreign nationals stranded in India due to the COVID-19 pandemic.

Such foreign nationals may not be required to submit any application to FRRO concerned for extension of their visas.

Before leaving the country, they may apply for exit permission which would be granted by the FRRO on gratis basis without levy of any overstay penalty.

If an extension of visa is required beyond September 30, the foreign national concerned may apply for an extension on the online e-FRRO platform on a payment basis which would be considered by the FRRO subject to eligibility as per the provisions of the visa manual.

According to the visa rules, Afghan nationals should get themselves and their family members registered within 14 days of their arrival with the local police, except those exempted from it.

Several Afghan nationals, feeling threatened or facing the fear of persecution at the hands of the Taliban, have expressed their desire to stay in India.

After the Taliban’s takeover of Afghanistan, the MHA had announced the introduction of a new category of visa called e-Emergency X-Misc visa for Afghan nationals.

The ministry has also announced that all Afghan nationals henceforth must travel to India only on e-Visa in view of the prevailing situation in Afghanistan.

India has already shut down its missions in Afghanistan and the visas are processed in New Delhi now.