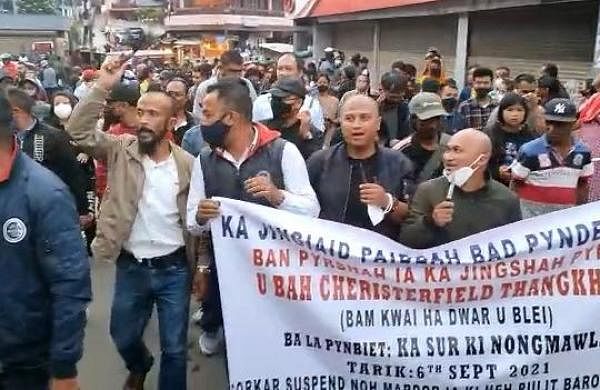 GUWAHATI: Civil society groups in Meghalaya capital Shillong on Monday literally resorted to cutting sarcasm against the state government with a “knife” protest.

Eleven organisations came together under the banner of “Ka Sur Ki Nong Mawlai” and staged the “rally pyndem tari” (knife surrender rally) against the Conrad K Sangma government’s failure to suspend some senior police officials responsible for the killing of former insurgent leader Cheristerfield Thangkhiew in an alleged fake encounter on August 13.

The protestors moved around with knives in a Shillong locality and “surrendered” them later. The knives surrendered were symbolic of the one the police claimed Thangkhiew had used in trying to attack them. By this action, they wanted to call the alleged bluff of the police.

After Thangkhiew’s killing at his residence, the police had explained that he was shot dead in self-defence as he pulled out a knife and attempted to attack the personnel.

The civil society groups have been since demanding the suspension of the police officials, including two Superintendents of Police, but the government tried to assuage the public feelings by ordering a probe.

The residents and the members of the civil society groups had gathered at the Mawlai petrol pump prior to taking out the peaceful rally which culminated at the Mawlai bus stand.

The protestors reiterated the demand for the suspension of the police officers. A team of police personnel, drawn from two districts, had carried out the operation at Thangkhiew’s residence that day.

The authorities of East Khasi Hills district, of which Shillong is the headquarters, had earlier served show-cause notices on six leaders of the umbrella body for violating COVID-19 protocols by holding public gatherings.

On the day of Thangkhiew’s funeral, parts of Shillong witnessed sporadic incidents of violence during which mobs of protestors torched and damaged a number of vehicles.