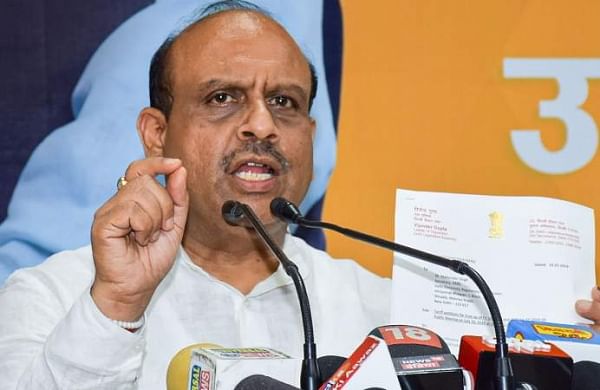 Gupta’s counsel gave assurance to a bench of Justices Vipin Sanghi and Jasmeet Singh that till September 20, the next date of hearing before the single judge, no tweet or press statement will be issued by the BJP leader on the issue.

The court was hearing an appeal filed by Gahlot against the single judge’s August 27 order refusing to pass an ex-parte order in the civil defamation suit.

During the hearing, the bench remarked, In politics, you (Gahlot) don’t have to be so sensitive.

Senior advocate Rajiv Nayar, representing Gahlot, contended that the approach of single judge was erroneous and that personal allegations of scam were made against the AAP leader by Gupta.

Senior advocate Ranjit Kumar, appearing for Gupta, made a statement that till September 20, the BJP leader will not issue any tweet or press statement relating to the issue.

He also said he will file within a week written statement in response to the suit before the single judge.

On August 27, the single judge has issued summons to Gupta in Gahlot’s defamation suit and had said that no ex-parte injunction was called for at this stage.

In the present case, prima facie, no personal allegations appear to have been specifically made against the plaintiff (Gahlot) except to the extent of saying that the entire transaction appears to be a scam. At this stage, therefore, no ex-parte injunction is called for, it had said.

It had granted 30 days to the BJP leader to respond to the suit as well as the application for an interim order.

The court stated that a perusal of Gupta’s tweets showed that he was either raising queries on placing of the order for 1,000 low floor buses and the costs involved in their maintenance or was commenting upon newspaper reports.

The court had observed that a timeline of social media content and the proceedings in the Assembly reflected that the topic was being discussed during the time period, that is, from March to July, 2021.

Earlier, Gahlot’s counsel had argued that Gupta, his political rival, made unabated tweets doubting the integrity of the minister in relation to the purchase of the low floor buses, in spite of a clean-chit being given by a high-powered committee.

The Delhi government floated a tender for buses.

After due process, it was awarded to Tata (but) all sorts of allegations were made.

A high-powered committee gave a report that everything was in order, the counsel had said.

Despite the report, we have unabated tweets (calling) me to be a person of doubtful integrity, he had said.

The court was informed that although the issue was discussed on the floor of the House and was answered by the minister, Gupta continued to make mis-statements.

In his civil defamation suit, Gahlot has sought Rs 5 crore damages from Gupta for allegedly making scandalous statements relating to irregularities in the procurement of low floor buses.

Besides seeking a direction to restrain Gupta from posting/ tweeting/ publishing any defamatory or scandalous or factually incorrect tweets/posts on social media platforms and giving interviews, writing articles and blogs in respect of purchase of low floor buses, the suit also sought removal of the allegedly defamatory content from social media.

On July 12, Gupta had written to Lieutenant Governor Anil Baijal demanding a CBI inquiry into the alleged scam involving procurement of 1,000 low floor buses by the Delhi Transport Corporation.

A three-member committee that probed the matter has recommended scrapping the tender of the AMC (annual maintenance contract) of buses finding various “lapses”, he had said.

There has been “irrefutable evidence of irregularities and violations in the AMC bid”, he had stated, alleging “criminal conspiracy and connivance” was responsible for it.