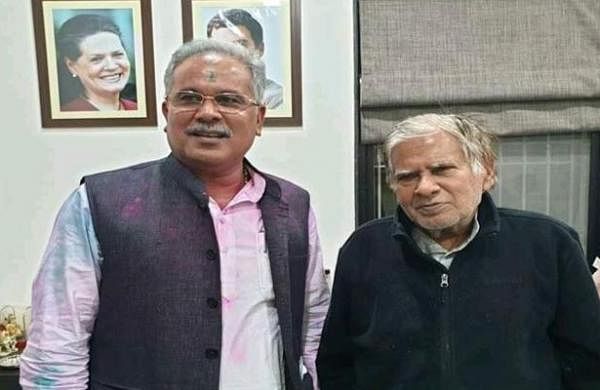 RAIPUR: The Raipur police on Sunday, September 5, 2021, registered an FIR against the father of Chhattisgarh chief minister Bhupesh Baghel for his derogatory remarks against a particular community.

The police station at Deen Dayal police station in the state capital lodged a case against Nandkumar Baghel under the IPC Sections 153-A (offence for promoting disharmony, enmity or hatred between different groups) and 505-A (punish speech causing fear or alarm among a group or provokes violence).

According to the police, the case has been registered on the complaints by Avnesh Pandey, Soumitra Mohan Mishra and other members of the Brahmin community against the CM’s father for instigating communal strife, hurting their sentiments and causing social disharmony.

Earlier in the day Bhupesh Baghel expressing his anguish over the remarks of his 86-year-old father against the prominent community said that the law is equal for all and the police should ensure legal action.

“As a son I respect my father but as the chief minister I cannot pardon anyone’s wrong or fault that wrecks the social order or harmony. For us the law is supreme”, the CM categorically asserted.

This comes after a video came to the fore, in which the CM’s father was purportedly heard giving defamatory remarks against an eminent community, with an appeal to boycott and banish them from India. In the past, there were allegations against Nandkumar Baghel for targeting the same community who criticised him for his derogatory comments.