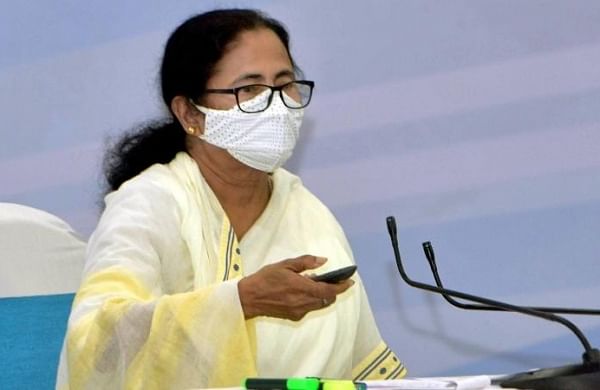 KOLKATA: TMC Saturday began campaigning for Chief Minister Mamata Banerjee who will contest from the prestigious Bhabanipur assembly seat in the city just hours after the Election Commission announced the date of by-election on September 30.

Slogans such as “Bhabanipur Nijer Ghorer Meyekei chai” (Bhabanipur wants her own daughter) were seen on the walls of buildings of the constituency.

Banerjee is a resident of Bhabanipur and has contested from the seat in the past two state assembly elections since 2011.

She had contested from Nandigram in the April-May assembly poll against BJP leader and her former protege Suvendu Adhikari and lost.

“We are thrilled that Didi will be back in the Bhabanipur seat. This is the area where she has grown up. This has been the base of her political activity,” a local TMC leader said after kick starting the wall writing campaign.

“For us, the challenge is not victory as we are confident about it. The challenge is to ensure Didi’s win with a record margin,” another TMC worker said.

Banerjee is fondly called “Didi” (elder sister) by her supporters.

Several TMC activists came down to the streets and shouted slogans hailing Banerjee as soon as the news of the bypoll dates was flashed in various news channels.

Banerjee, who led her party to a massive electoral triumph for a third successive term, is required to win a seat in the state assembly by November 5 in conformity with the constitutional provisions in order to continue as chief minister.

The Constitution allows a non-member of a state legislature or Parliament to continue in a ministerial position for six months.

After her defeat in Nandigram, Sovandeb Chattopadhyay, state cabinet minister and TMC MLA from Bhabanipur, vacated the seat to facilitate her election from there.

Banerjee had been elected to the Assembly after winning the by-poll in the seat months after her party stormed to power by ousting the 34-year-old Left Front regime in 2011.

She was a six-term MP from the South Kolkata Lok Sabha seat, which has the Bhabanipur seat as one of its segments.

Wondering what prompted the Election Commission to announce by-poll in Bhabanipur assembly seat this month end, WBPCC president Adhir Ranjan Chowdhury Saturday said he will not describe it as being inclined any political party.

Congress, he said, will collectively take a stand on contesting the Bhabanipur seat against Chief Minister Mamata Banerjee, who is slated to be in the fight for the prestigious seat.

To another question, Chowdhury said the TMC government has done a grave injustice by not holding municipal polls for over two years across the state “Municipalties have become places of loot and corruption with TMC appointing its own people as administrators instead of government officers at the local level which should be the practice.

By this the TMC has brought back its own leaders to helm local bodies undemocratically,” he added.

BJP and the CPI(M) on Saturday expressed reservations about the Election Commission’s decision to hold by-poll in Bhabanipur assembly constituency, from where West Bengal Chief Minister and party supremo Mamata Banerjee plans to contest, on September 30, while the ruling Trinamool Congress and the Congress welcomed it.

Polling for “deferred adjourned” elections in two assembly seats of West Bengal – Samserganj and Jangirpur – will also be held on September 30, the Election Commission announced earlier in the day in New Delhi.

However, citing Covid-19 situation, the EC decided not to hold by-elections in four other assembly seats in the state which are also lying vacant due to deaths and resignations of MLAs.

“We had always maintained that holding by-polls and polls to all the seats should be held together when the Covid-19 situation improves.

We don’t know if holding by-election to one seat and election to two seats is a practical decision since the pandemic is still raging and there is the threat of third wave.

However, we accept the decision of the EC,” opposition leader in the state Assembly, Suvendu Adhikari of the BJP, said.

Adhikari defeated Banerjee from the Nandigram seat in the assembly elections held earlier this year.

The ruling TMC is keen on the by-polls as Banerjee will have to get elected within six months to continue as the CM.

In that case, the by-polls must be conducted by November 5.

The decision proved that the TMC’s allegations that the EC is being controlled by the BJP are false, he said.

BJP state president Dilip Ghosh wondered why the election to urban local bodies in the state are being held up for years while assembly by-election is facilitated when the TMC enjoys absolute majority.

Senior TMC leader Firhad Hakim said, “The bypoll was a necessity as per constitutional norms but the BJP was trying to derail the process for narrow partisan interest. We hail the decision of the EC. We will follow all Covid-19 guidelines.”

The Congress’ Rajya Sabha MP Pradip Bhattacharya said it is a welcome decision of the EC since holding bypolls within six months of counting is mandatory.

Banerjee had moved out of her traditional seat in Kolkata’s Bhabanipur to fight in Nandigram during the assembly polls.

After the election results were out, senior TMC leader Sovandeb Chattopadhyay who won from Bhabanipur vacated the seat to allow Banerjee to contest from there.

Banerjee had won from Bhabanipur twice since 2011.