‘Will force our way if they stop us’: Farmers’ mahapanchayat in UP on September 5 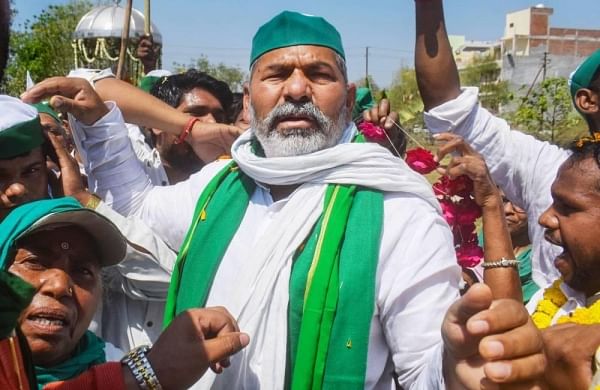 LUCKNOW: The preparations are complete for the show of strength by Samyukta Kisan Morcha (SKM), an umbrella organisation of farmers protesting against the centre’s three farm laws, by organising a mahapanchayat in Muzaffarnagar in western Uttar Pradesh on Sunday.

In an election year, the SKM intends to use the mahapanchayat to mobilise people against the ruling dispensation in western UP. The SKM is likely to announce ‘Mission UP’ at the Muzaffarnagar mahapanchayat.

“This mahapanchayat is not just linked to elections. In UP, farmers are facing hardship. Besides the power tariffs, the sugarcane price hasn’t gone up since last 2016. The Centre has increased it by five rupees, five paise per kilogram. Are you insulting farmers?” Rakesh Tikait said.

As per the BKU claims, around 300 active organisations of farmers, labourers, employees, students, teachers, women, and social groups are expected to attend the mahapanchayat.

Bharatiya Kisan Union leader Rakesh Tikait said that it was impossible to quote the number of people who would reach for the mahapanchayat. “But I can promise people will reach in huge numbers,” Tikait said.

Further, he added that no one could stop the farmers from reaching the mahapanchayat, and if they were stopped, they would force their way to the venue.

As per the BKU sources, so far, representatives from 22 states had sent their confirmation to attend the event. “In the mahapanchayat, maximum farmers from UP, Punjab, Harayana, Rajasthan, and Uttarakhand will take part,” said Tikait.

Around 2,000 farmers are expected to reach Muzaffarnagar from Punjab. From protest sites at the Delhi borders, 400-500 farmers will leave for the mahapanchayat. The farmers are leaving in shifts in buses from Tikri and Ghazipur borders.

However, people were mainly coming from the villages, said Tikait. Farmers from Maharashtra and others parts of India are also expected to join in.

A total of 500 buses have been hired to transport farmers to Muzaffarnagar.

Farmers will be holding 18 such mahapanchayats in Uttar Pradesh in the first phase of their campaign.

According to SKM sources, some 5,000 volunteers were entrusted with a smooth movement so the farmers reach the maidans for the mahapanchayat on Sunday.

“All arrangements have been made. We will have to see who all are able to reach the main site. We have arranged 12-14 screens and 4-5 fields for those who are unable to reach there due to the crowd. Roads and parking areas will be jammed,” Rakesh Tikait said.

However, the district administration is also alert and six companies of the provincial armed constabulary (PAC) and two companies of rapid action force (RAF) will be deployed for the mahapanchayat in Muzaffarnagar on Sunday.

According to Saharanpur range DOG Preetinder Singh, the event would be videographed while five SSPs, seven ASPs, and 40 police inspectors will be deployed on security duty.

Khori village: SC asks civic body to give details of structures not demolished with justification