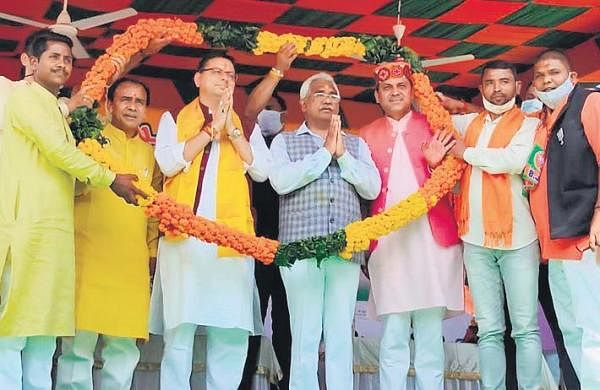 DEHRADUN:  The two main political parties of Uttarakhand—Congress and the Bharatiya Janata Party kicked off their election campaign on Friday.  The BJP began its campaign from Srinagar town. “People of Uttarakhand have trusted us, gave us extraordinary mandate with a Chief Minister who is a youth icon.

Today is the beginning of our election campaign and we chose Srinagar Assembly to start with,” Madan Kaushik, the state president of the party said, announcing the beginning of the campaign.  Chief Minister Pushkar Singh Dhami and Cabinet minister Dhan Singh Rawat were present on the occasion.

“We are here to seek the blessings of the people of Srinagar as well as Uttarakhand. Everyone including me in the BJP are your ‘Sewak’ (Servants). Our honorable Prime Minister has been working tirelessly and motivating every worker of the party to work for the progress of our country,” Chief Minister Dhami said.

Meanwhile, the Congress started the first phase of its ‘Parivartan Yatra’ from Khatima, the constituency of CM Dhami, with its star campaigner Harish Rawat, stage president Pritam Singh and Uttarakhand incharge Devender Yadav.

Party general secretary and former Chief Minister Harish Rawat said, “The BJP has cheated the people of Uttarakhand. The party is so self-absorbed that it has changed the CM two times within four months. People will reply to this in the upcoming elections. Congress has always done everything for this country and we will keep doing so.”

Political experts said the election is going to be very competitive.  Jay Singh Rawat, Dehradun based political commentator said, “The Congress and the BJP both know that these elections are different from the previous ones. Both parties will leave no stone unturned as every single seat will count.”