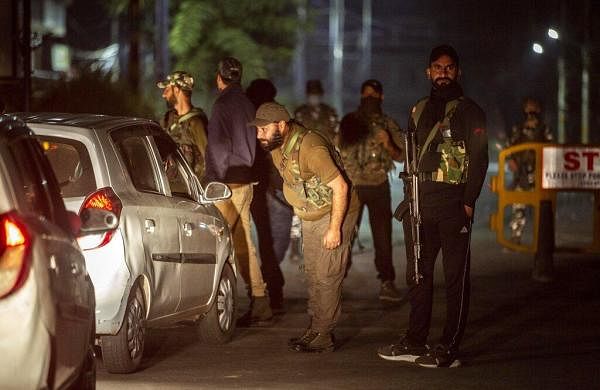 SRINAGAR: Authorities have imposed restrictions and shut internet and mobile service barring BSNL post-paid service in Kashmir as senior separatist leader and former Hurriyat Conference chairman Syed Ali Geelani was laid to rest in a local graveyard near his Hyderpora residence in Srinagar in the early hours of Thursday.

The burial of 92-year-old Geelani, who passed away at his residence yesterday evening, was held at 4.45 am today, sources said. His family members, some relatives and neighbours were allowed to participate in his burial.

Immediately after his death at around 10.30 pm, authorities imposed restrictions in Srinagar and other parts of the Valley to restrict public movement and prevent people from thronging to Geelani’s residence to pay their homage.

The security men have placed concertina wires and armoured vehicles on the roads leading to Geelani’s residence to restrict movement of people.

The authorities have also suspended mobile internet and mobile services across the Valley. However, the BSNL postpaid and broadband service is working.

Geelani, who was under house detention since 2010, was not keeping well and was suffering from multiple ailments.

After the eruption of militancy, Geelani had joined separatist politics and emerged as one of the strong face of separatist movement in J&K.

Known for his hardline ideology and advocating Jammu and Kashmir’s accession with Pakistan, Geelani quit his faction of separatist conglomerate Hurriyat Conference in June last year.  He was heading the Hurriyat faction since 2003.

The Hurriyat Conference, an umbrella of different separatist groups,  was formed in 1993. However, owing to differences, there was a split in Hurriyat in 2003 and Geelani formed his own faction, known as hardline faction while Mirwaiz Umar Farooq headed another faction (a moderate faction).

Geelani was a member of Jamaat-e-Islami Kashmir but later quit Jamaat to form his own party — Tehreek-e-Hurriyat – with his likeminded friends and colleagues.

He was opposed to any bilateral talks with India and always favoured tripartite talks involving Pakistan, Kashmiri leaders and India. He was the only Kashmiri leader to oppose former Pakistan military ruler General Parvez Musharraf’s 4-point Kashmir formula.