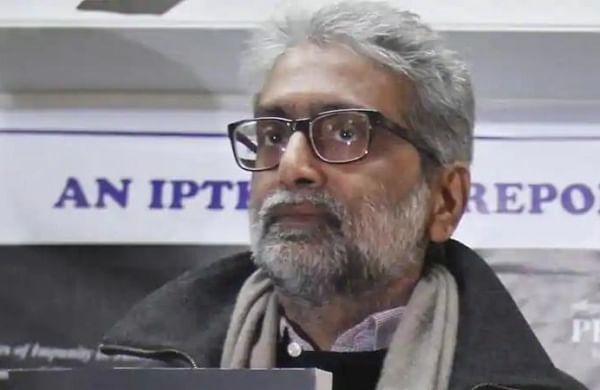 MUMBAI: Activist Gautam Navlakha, an accused in the Elgar Parishad-Maoist links case and currently lodged in Taloja prison, moved the Bombay High Court on Thursday seeking that he be placed under house arrest as part of his judicial custody, owing to his advanced age and medical ailments.

In his plea, Navlakha, 69, also sought that the HC direct authorities of the Taloja prison in neighbouring Navi Mumbai to get him medically examined for a lump developed in his chest.

His counsels, Yug Chaudhry and Payoshi Roy, told a bench of Justices S S Shinde and N J Jamadar that Navlakha wished to be examined medically to rule out “cancer”.

In his plea, Navlakha cited the Supreme Court’s order issued in May this year, whereby the apex court had dismissed his default bail plea, but found merit in treating house arrests as an alternative form of detention, especially for such undertrials who are aged or suffering from serious medical ailments.

Navlakha’s counsels also told the HC that they had already written to the Taloja prison authorities, seeking a medical check-up for the lump in his chest, but they were yet to hear anything from the authorities.

They further told the HC that Navlakha also suffered from hypertension that he developed while in prison, and several other ailments.

Navlakha was arrested by Pune police from Delhi on August 28, 2018 in connection the Elgar Parishad case.

He was initially kept under house arrest, but subsequently sent in judicial custody.

As per Navlakha’s plea, he has spent one year and three months in prison.

The HC will hear the plea further later in the day.

The case relates to the Elgar Parishad conclave held in Maharashtr’s Pune district on December 31, 2017.

The Pune police had claimed that the event was backed by Maoists, and provocative speeches made there led to caste violence near the Bhima-Koregaon war memorial in the district the next day.